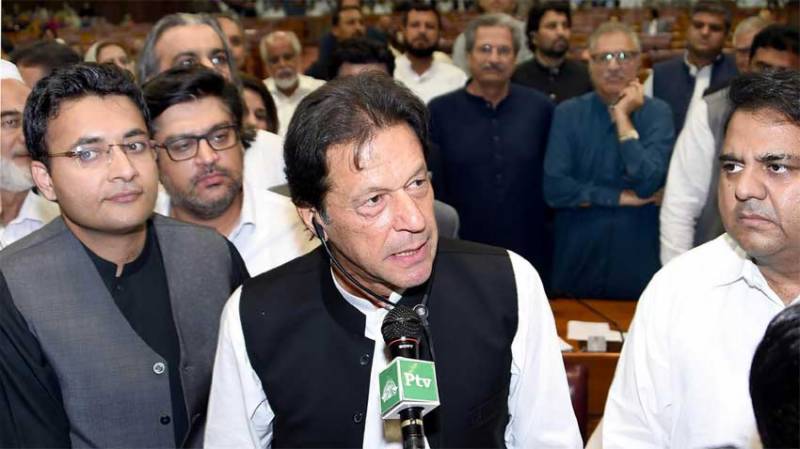 Prime Minister-elect Imran Khan has pledged to bring about the change being awaited by the nation for the last seven decades.

He was speaking in the National Assembly after his election as Leader of the House at the Parliament House in Islamabad today (Friday).

Imran Khan said he achieved success after a struggle of 22 years and he did not owe this success to any military dictator.

He also held out an assurance that there would be no NRO for anyone and all looted money would be recovered and brought back.

He said debt of the country increased from six thousand to two thousand eight hundred billion rupees during the last five years.

He said there would be debate in the parliament on debt issue and those responsible would be held accountable.

The Prime Minister-elect said he would empower the Parliament and twice a month he would respond to questions by members during Question Hour in the National Assembly.

Imran Khan said a system will be introduced to raise money from the country so that the government does not have to go to foreign countries to get loans.

Thanking the youth for their support to help him become the Prime Minister-elect he said he will ensure provision of jobs to the youth so that they do not have to go abroad for earning their livelihood.

Speaking about rigging allegations by the opposition members, Imran Khan said the politicians, who are creating noise in the Assembly did not open four constituencies for investigation on his demand.

He said the Judicial Commission on electoral rigging allegations had given forty findings, and one of them was that 25 million ballots were missing.

He said if the persons, responsible for those irregularities, had been held accountable by the last government, they need not stage protest today.

Giving an analogy with the world of cricket, he said the concept of neutral empire was introduced in 1986 which brought regularity in the game and winners and losers both accepted its decisions without any question.

He said we will also develop an electoral system in the country which will be totally neutral and there will not be any question of irregularity in elections again.

Imran Khan said everyone will have the right to protest and the government will even provide a space for that. However, he gave a caution that government will not be cowed down by blackmailing or disruption in the way of its working.

Addressing the National Assembly, Shahbaz Sharif, who lost election for leader of the house against Imran Khan, said people have rejected the 2018 election because it was rigged.

He requested the Speaker National Assembly to constitute a parliamentary commission to probe the rigging allegations within thirty days.

He said amendments should be introduced into Election Act 2017 in the light of the recommendations of the parliamentary commission so that elections could never be rigged in future.

Leveling allegations of rigging, Shahbaz Sharif said the Election Commission's Result Transmission System failed on the polling day, polling agents were expelled from polling stations and 1.6 million votes were rejected. He said PML-N leaders and workers were arrested before elections.

Shahbaz Sharif said they have pledged to give protection to the democratic system and despite reservations on election results they will never degrade sanctity of the House.

In his remarks on the occasion, Chairman PPP Bilawal Bhutto Zardari said Imran Khan is not the prime minister of a particular party but the entire country and expressed the confidence that he will work towards addressing the problems of the masses.

He said his party will fully support him in that endeavor.

He felicitated Imran Khan on his election as the country's next prime minister.

Bilawal Bhutto Zardari also paid tributes to all those martyred in the run up to the elections and during its conduct.

He said PPP demands investigation into all these terrorist attacks and a report be submitted in the house.

The PPP Chairman also expressed concerns over the failure of result transmission system of the ECP and late announcement of results.

Vice Chairman of PTI Shah Mehmood Qureshi in his remarks said that the people have given mandate to the PTI and it will transform the country.

He said others should respect this mandate for the continuation of democratic process.

He regretted the sloganeering of PML (N) members in the house on the occasion of the speech of Prime Minister elect Imran Khan.

MMA leader Abdul Wassey said a new election commission should be established after consultation amongst the political parties.

He said the previous government should have opened the four constituencies demanded by the PTI Chairman Imran Khan.