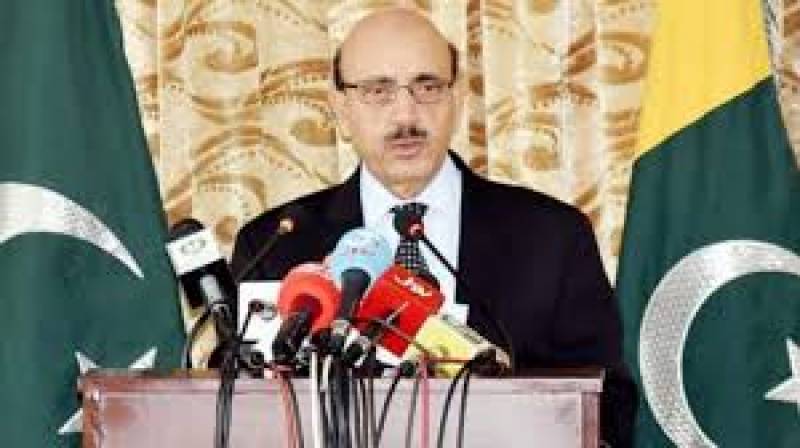 ISLAMABAD-MIRPUR (AJK):Azad Jammu and Kashmir (AJK) President Sardar Masood Khan Friday termed Neelum valley as the first defense line of Pakistan and Azad Kashmir, and its people were the unpaid defenders of the motherland.

He expressed these views while addressing a big gathering after distributing relief goods among the calamity-hit people at Kel in Neelum Valley on behalf of Pakistan Red Crescent Society (PRCS) .

The function was also addressed among others by Chairman PRCS Abrarul Haq and the Administrator PRCS Azad Kashmir chapter Col (retd) Tahir Younus.

The president said that the people of Neelum Valley had valiantly responded to Indian aggressions and the natural calamities in every period.

The families living in the valley were the first to fall victims, whenever a war broke out or firing was carried out from the other side of the Line of Control, he said adding that the sacrifices offered by the people would never be forgotten.

He said that unfortunately, the Neelum valley side by side with the Indian aggressions was prone to natural calamities disasters. But it was a matter of satisfaction that the armed forces of Pakistan and the district administrations were the first, reach for rescue and relief operation whenever some natural or man-made calamity hit the area, he added.

The president said that he had personally witnessed  how the armed forces of Pakistan had saved precious lives of the people during the snow avalanche in Sargan area where 68 people had lost their lives and more or less the same number of other people had sustained injuries in the tragedy.

He said that compensation for the losses was still being paid.

Masood Khan said that the government would build bunkers along with the residential houses as well as community bunkers near the cluster of houses of those living close to the LoC in order to protect their lives.

Besides, the government had made a three times increase in the compensation of those affected in the Indian firing, and now according to the announcement of  Prime Minister, Imran Khan  , health cards were also being issued to them, he added.

The president said that 235 houses destroyed in the tragedy in Surgan and other areas had been reconstructed, while the reconstruction of another 375 houses was in progress. The affected people would also be compensated for the losses of their businesses and cattle heads, he added.

Touching upon the situation of Indian Occupied Kashmir (IOK), he urged the international community to take notice of the state repression being perpetrated by India under the garb of new domicile laws which were being used as a tool for the ethnic cleansing of the innocent Kashmiri people.

“The Domicile Laws are an attempt to snatch the rights of Kashmiris and a part of a conspiracy to bring in a demographic change in the held valley by turning the majority of Muslims into a minority in their own homeland,” he added.

The president said that coronavirus was another natural calamity being faced by the people of not only Neelum Valley but the whole world.

However, its intensity was far low in Pakistan and Azad Kashmir as compared to other parts of the world, he said adding "We will have to fight on two-pronged fronts that is the corona pandemic and the economic front to ensure uninterrupted supply of essential commodities."

The president urged the people to take all possible preventive measures in the days to come to affectively contain the spread of coronavirus.