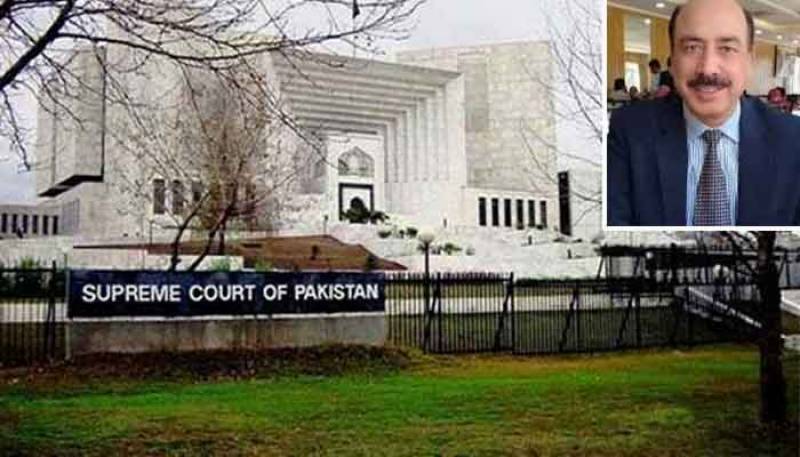 ISLAMABAD: The Supreme Court (SC) sought assistance of the Attorney General for Pakistan (AGP) in the constitutional petitions seeking an inquiry into the controversial video of Accountability Court Judge Arshad Malik, shared with the media by Pakistan Muslim League (PML-N), and issued him a notice for July 23, 2019. The SC issued a notice to the AGP and asked for recommendations in the case.

On July 06, Pakistan Muslim League (PML-N) Vice President Maryam Safdar in a press conference presented a controversial video of AC Judge Muhammad Arshad Malik in which he was heard saying that he was blackmailed into convicting former prime minister Nawaz Sharif.

The press conference was held in Lahore and senior leaders of the party including Leader of the Opposition in the National Assembly Mian Shahbaz Sharif, former Prime Minister Shahid Khaqan Abbasi and others were also present there.

Later on, three petitioners including advocates Ishtiaq Ahmed, Sohail Akhtar and Tariq Asad approached the apex court filing identical petitions, seeking probe in the matter. On Tuesday, the court after hearing the petitioners, issuednotice to the AGP for July 23, asking him to assist it in the matter.

“We have heard the learned counsels for the petitioners and let the AGP appear on July 23 so as to assist this court on diverse issues, raised in the petitions and regarding the options available in those regard,” CJP Asif Saeed Khan Khosa noted down in the order.

Earlier, the court first heard the arguments of Chaudhry Munir Sadiq, counsel for the petitioner Ishtiaq Ahmed. The counsel submitted that the instant matter is of great public importance and related to enforcement of fundamental rights of the public.

They informed the court that on July 6, PML-N Vice President Maryam Safdar shared with the media a video of Judge Arshad Malik in which he was purportedly heard saying that he was blackmailed into convicting former prime minister Nawaz Sharif.

“Where the press conference was conducted,” the CJP asked the counsel to which he replied that it was held in Lahore. He further submitted that matter is of great public importance which must be probed.

Munir Sadiq further contended that all the political parties including PPP and JI, and lawyers in Pakistan have demanded an investigation into the video scandal, adding that Prime Minister Imran Khan had also said that the judiciary should take notice of the matter.

All political parties were of the view that the SC should take suo moto notice of the issue, the counsel submitted. “Will it not question independence of judiciary and it will be assumed that the court is taking action on the demand of the public,” the CJP asked the counsel saying it is not a suo moto case which is taken on the demand of the public.

“Whosoever has a problem should come forward and file the petition and if the court needs to do so, it will do it itself by taking suo moto action but not on the demand of public,” the CJP remarked and asked the counsel to give his suggestions as to what the court should do in the matter.

The counsel further submitted the instant matter requires a process wherein efforts be made to search out the truth adding that if anyone has committed contempt of court, they should be proceeded with in accordance of law.

“If we start searching out the facts, then what the judges hearing the pending appeal in the high court will do,” the CJP asked the counsel.

Meanwhile, Muhamamd Ikram Chaudhry, counsel for another petitioner Sohail Akhtar, submitted that the allegations levelled in the press conference and the video are serious in nature which aim to malign the integrity of judiciary but till date nothing has been done by the state institutions to probe the matter and unearth the actual truth leading to restoration of sanity in the entire matter.

He also read out the statements given by Maryam Safdar as well as affidavit of Accountability Court judge Arshad Malik. He said that the issue is of immense public importance as the credibility of the judiciary has been questioned adding that if anyone had committed contempt of court, he should be proceeded with in accordance with law.

Ikram Chaudhry further submitted that the video and later on the affidavit of Judge Arshad Malik is very important. The CJP observed that if the apex court gives any order, the high court would become restricted by it.

Muhammad Ikram Chaudhry contended that the statement of Judge Arshad Malik should be looked at as he said that it is extremely important serious. “We are not saying that it should not be looked at. It must be looked at as it is extraordinary and unusual,” the CJP said.

He said that the issue relates to integrity of judiciary and questioned as to why the judge held meetings with those whom he had convicted.

Ikram Chaudhry submitted that the judiciary was being mocked because of statements and counter-statements being made on the matter, that’s why he requested the court to probe the instant matter on the basis of cyber laws as well as the National Accountability Ordinance (NAO) 1999.

Addressing the counsel, Justice Umar Ata Bandyal, another member of the bench, observed that there are three main issues in the instant matter; misconduct of the judge, his character and the sanctity of the institution.

He said that as for as the character and misconduct of the judge is concerned, there is a competent forum to deal with it while the apex court is to protect sanctity of the institution.

Meanwhile, after the interval, the court took up the petition of advocate Tariq Asad who while arguing before the court pleaded for formation of a Judicial Commission to probe the conduct of the judge, which has been proved corrupt.

He appeared in-person before the court and said that a forensic audit of the video should be conducted. He questioned as to why the government and agencies did not notice the judge while he was meeting people.

The petitioner submitted that a one-member commission headed by a judge of the SC should be constituted to probe the instant matter. “Should a retired judge head the commission?” the CJP asked Tariq Asad to which he replied in affirmative.

The CJP observed that the Accountability Court judge was the subordinate judge of the Lahore High Court who was appointed by the federal government on deputation. Once the judge is in Lahore High Court, the instant petitions with prayers will be relevant there, he said. The CJP noted that the court will examine as to where it could intervene as he said that the real issue is the integrity and credibility of the court.

The CJP said that the basic issue is of trust of the nation in judiciary and if the people fail to trust it, then justice will be difficult to deliver.

Meanwhile, after hearing the counsels for the petitioners, the Chief Justice asked about Attorney General to which Deputy Attorney General Sajid Ilyas Bhatti informed the court that AGP Anwar Mansoor Ali Khan had left for The Hague as the International Court of Justice (ICJ) will announce its verdict in Kulbhushun case today (Wednesday).

On a court query, he said that the AGP may return next week at which the court adjourned the hearing for July 23.