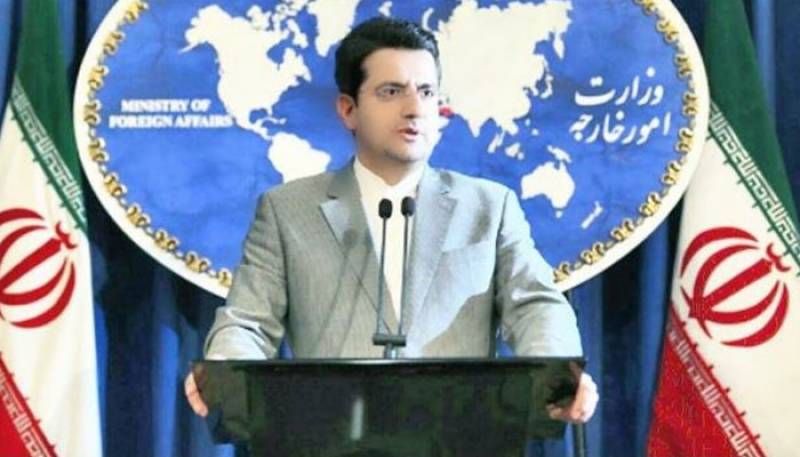 TEHRAN: Iran’s foreign ministry spokesman said that the Islamic republic was assisting a "foreign tanker that had encountered a technical problem" in the Gulf after receiving a distress call.

"According to international regulations... Iranian forces approached it and using a tugboat brought it into Iranian waters for necessary repairs," Abbas Mousavi said according to an official government Twitter account.

The spokesman added that further details would be released later.

Earlier TankerTrackers reported that the Panamanian-flagged tanker Riah, used in the strategic Strait of Hormuz "for fuelling other vessels" had crossed into Iranian waters on July 14 "for the first time as she slowed down".

According to the online oil shipment tracking service, at that point the tanker’s automatic identification system stopped sending signals.

The Riah’s last known position was off Qeshm Island in the Strait of Hormuz.

Tensions in the region have soared in recent weeks, with the US calling off air strikes against Iran at the last minute after Tehran downed an American drone, and Washington blaming Tehran for a series of attacks on tanker ships off the United Arab Emirates coast.

On Tuesday, a UAE official, who requested anonymity, said the tanker Riah did not send out a distress call.

"The tanker in question is neither UAE owned nor operated, does not carry Emirati personnel, and did not emit a distress call," the official told AFP.

"We are monitoring the situation with our international partners."

On May 12, the UAE said four ships -- including two Saudi oil tankers, a Norwegian vessel and an Emirati one -- had been targeted by "acts of sabotage" in Gulf waters off its coast.

Meanwhile, a UAE investigation found that a "state actor" was likely responsible for the attacks, probably carried out by limpet mines, but did not specifically blame Iran.

A month after the mysterious attacks, two fuel-loaded tankers -- one Norwegian and another Japanese-owned -- passing through the Strait of Hormuz towards the Indian Ocean were hit by blasts that caused major fires.

Washington and Riyadh again blamed Tehran for the attacks.

Tensions further intensified on July 4 when British Royal Marines helped the Gibraltar authorities detain an Iranian tanker that US officials believe was trying to deliver oil to Syria in violation of separate sets of EU and US sanctions -- a claim denied by Iran.

In a speech on Tuesday Iran’s supreme leader Ayatollah Ali Khamenei vowed to retaliate against the British for the ship’s seizure.

"The vicious British... have committed piracy and stolen our ship... God willing the Islamic republic will not leave these vicious acts unanswered," he said.