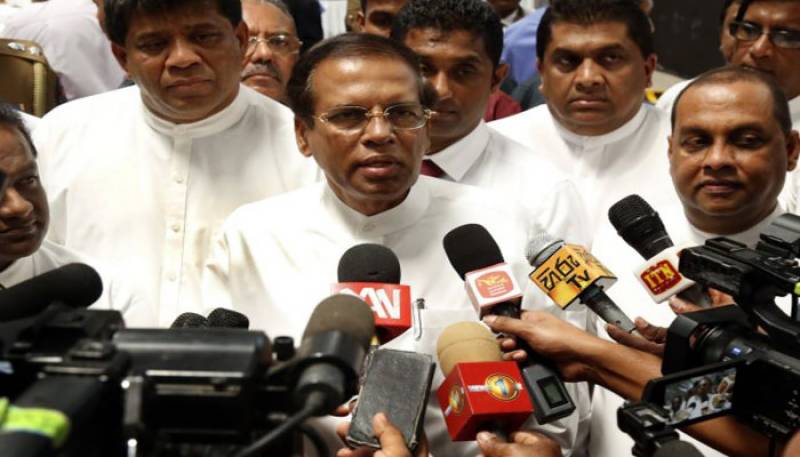 COLOMBO: Sri Lanka´s president has demanded capital punishment for the "terrorists" responsible for the deadly Easter Sunday attacks just days after he blamed international drug dealers for the suicide bombings.

President Maithripala Sirisena has been battling his own uneasy coalition government -- which is seeking to abolish capital punishment altogether -- in a push to restart executions.

While Sri Lanka still maintains the death penalty, there has been a moratorium on judicial executions for murder and other serious crimes since June 1976.

Sirisena has for weeks campaigned for the moratorium to be lifted to execute major drug traffickers, and in remarks released by his office Wednesday he said "terrorists" should also be hanged for "crimes against the state".

"If we do not carry out death penalty, the perpetrators of the Easter attacks will be free of any punishment," his office quoted him as telling a rally on Tuesday.

A spokesman for the Prime Minister´s office, Sudarshana Gunawardana, said there was no change in their policy against executions.

"We are for abolition of capital punishment," Gunawardana told AFP. "There is no change in that policy under any circumstances."

He noted that the president had initially blamed the April 21 attacks on extremists, then international drug cartels, and now was pointing the finger at unnamed terrorists.

"In his desire to carry out hangings, he seems to be getting confused," Gunawardana added.

Local extremist group National Thowheeth Jama´ath (NTJ) is widely accepted as being responsible for the suicide bombings of churches and hotels that killed at least 258 people in April, and just over 100 men and women have been arrested.

At least 45 foreigners were among those killed while nearly 500 people were injured.

Sirisena on Monday accused international drug syndicates of orchestrating the attacks -- a position not shared by his own police department.

The president has sparked intense debate about restoring capital punishment for drug offenders as he leads a national crackdown on narcotics.

Sri Lankan courts routinely hand down death sentences to drug offenders, murderers and rapists but they are automatically commuted to life imprisonment.

The court banned any executions until it rules on a petition seeking a declaration that hanging breaches the country´s constitution.