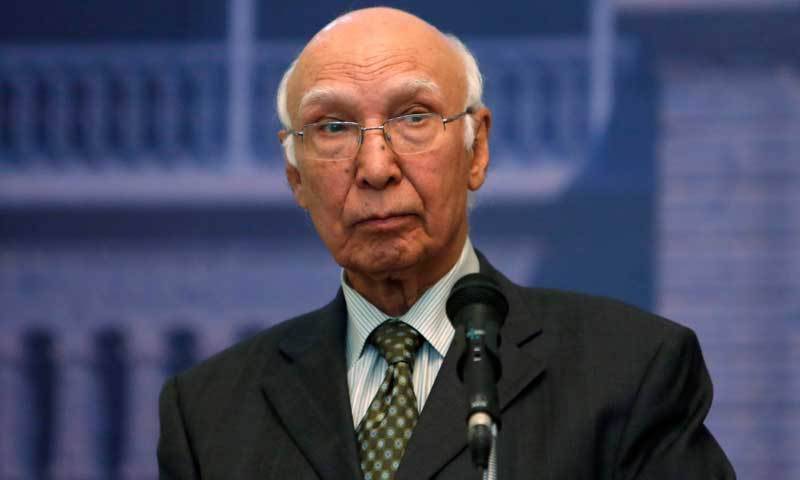 According to a foreign office statement, issued here, he said during an official talks with the US National Security Advisor, Lt. General H.R. McMaster, held at the Ministry of Foreign Affairs here.

Sartaj Aziz also highlighted the importance of effective border management between Pakistan and Afghanistan as part of the actions required to achieve sustainable peace in the region.

Sartaj welcoming the US delegation, noted that Pakistan and the US have been close friends over decades and that a continued strong partnership between the two countries remained critical to promoting and sustaining peace and stability in the wider region.

He gave a detailed briefing on the policies being pursued by the Government that have resulted in improved security environment and economic turnaround in Pakistan.

On terrorism, the Adviser noted that impressive gains have been made in eliminating terrorists and that Pakistan remained determined to continue this fight as part of the National Action Plan until the scourge of terrorism is completely eliminated from its soil.

He said that the Government was determined to maintain the existing momentum on both the security and economic fronts to lead the people of Pakistan towards a prosperous and secure future.

The Pakistan side also shared its perspective on the plight of Kashmiris in Indian Occupied Kashmir and the status of relations with India. In reiterating Prime Minister Nawaz Sharif's vision of a peaceful neighborhood and commitment to dialogue and engagement, the Adviser apprised the visiting delegation of the steps taken by Pakistan to reach out to both India and Afghanistan.

General McMaster thanked the Adviser and acknowledged Pakistan’s sacrifices in combating extremism and terrorism. He renewed the commitment of the new Administration to work closely with Pakistan in strengthening mutually beneficial relations and towards the shared objectives of peace and stability in Afghanistan and the region.