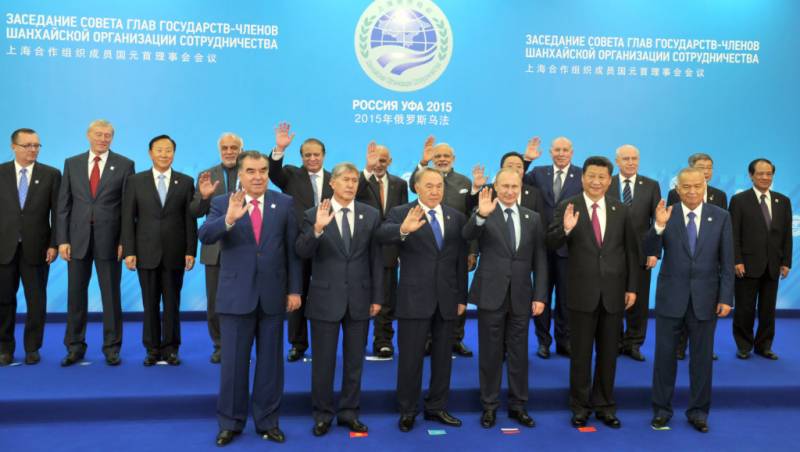 BEIJING: The Shanghai Cooperation Organization (SCO) could prove to be the perfect platform for solving Pakistan-India bilateral issues with dialogue and confidence-building measures on the borders.

In the past, it helped China sign agreements with Russia and the Central Asian republics on the transparency of the deployment of conventional forces on borders, said a Chinese news website "China.org.cn" here on Monday.

The SCO is a political, economic and security forum bringing together China, Russia and the Central Asian states of Tajikistan, Kazakhstan, Kyrgyzstan and Uzbekistan.

In a matter of weeks, Pakistan and India will complete the requirements to attain full membership at the upcoming summit in June.

Originally named the Shanghai Five in 1996, the five-member forum helped to resolve border disputes and controlled arms transfers between China and Russia.

Traditionally the SCO, as it was renamed in 2001, served as a political/security organization focusing on intelligence sharing, counter-terrorism efforts in Central Asia and cyber-terrorism.

The ethos of the platform has always remained in line with the "Shanghai spirit" as consensus, mutual respect and closer cooperation are compulsory in the decision making format, focusing on mutual assistance and the pursuit of shared development.

All members are equal under the frame work of the group.

The Russian Foreign Minister Sergey Lavrov said recently, "We expect the process of providing full membership to India and Pakistan to be completed at the SCO Council of Heads of State meeting scheduled to be held in Astana next June. It is without a doubt a historical step that will elevate the political and economic profile of the SCO and significantly strengthen its security capabilities."

After this expansion, SCO will represent 40 percent of the world population; the addition of the two South Asian rivals greatly expands the sphere of influence of the organization as all important regional players come under the umbrella.

Ideally, the SCO could prove to be the perfect platform for solving Pakistan-India bilateral issues with dialogue and confidence-building measures on the borders.

In the past, it has helped China sign agreements with Russia and the Central Asian republics on the transparency of the deployment of conventional forces on borders.

In addition, SCO military exercises will enable India and Pakistan to take part in drills, trainings and data sharing that might improve their bilateral relations in the long run.

China's Foreign Minister, Wang Yi outlined the proposed expansion as an ordered process at the SCO Summit in 2016.

He noted that the accession of India and Pakistan was a new, maturing phase in the forum's development and member states should consult on improving organizational structure.

He was optimistic about the accession of both states and surmised that the integration of a wider Asian region into the SCO would boost its growing relevance in global affairs, auguring well for the "vitality and bright prospects of the organization."

Critics differ over the proposed accession of India and Pakistan as they observe that "constant bickering" between the two nations would harm the equanimity and harmony of the organization, making it difficult to achieve consensus and slow down momentum of the SCO as specified in its development strategy toward 2025.

In any case, Pakistan was the first country outside the original grouping that applied for membership in 2005. Its inclusion augments its positive role as an anchor in regional trade, peace and stability.

The flagship corridor of the Belt & Road Initiative, the China-Pakistan Economic Corridor, traverses through Pakistan. It is the future transport link for exporting CARS energy resources and a gas pipeline project (TAPI) is already under construction.

Needless to say, Pakistan does not see any glitches ahead in its cohesion with other members. The anti-terrorism structure under the SCO provides Pakistan the opportunity to collaborate with the Central Asian states on security issues and to further explore military and technical cooperation with Russia and participate in communication projects with China.

Potentially, the SCO has similarities to the U.S.-led military alliance, North Atlantic Treaty Organization (NATO) but could ultimately be more like the United Nations as it gradually takes in more key members and focuses further on security.

Having said that, SCO is not visualized as a "military bloc," and the alliance was formed to jointly meet challenges and it completely adheres to international law and the UN Charter. (APP)