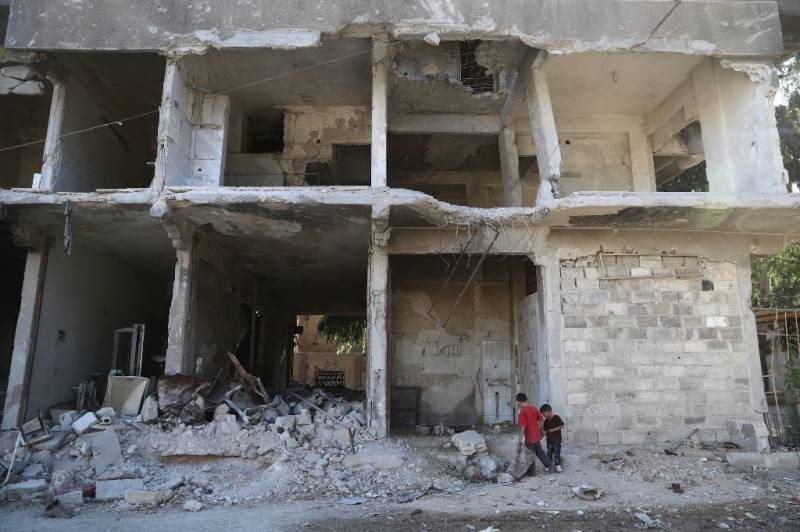 WASHINGTON: (APP) Middle East economies have plunged into decline in the years of war since the Arab Spring, creating daunting economic and development challenges, according to an IMF report released Friday.

Nose-diving growth, soaring fiscal imbalances and decimated labor markets across the region call for newly concerted efforts from donor countries and coordination among humanitarian aid groups and development bodies, said the report, released ahead of a United Nations summit on the refugee crisis.

International Monetary Fund Managing Director Christine Lagarde said that, while the world's attention had been drawn to the humanitarian impact of wars, economic disasters were also unfolding.

"Much of the productive capital in conflict zones has been destroyed, personal wealth and income losses are enormous, and human capital deteriorates with the lack of jobs and education," she wrote in a blog post accompanying the report.

The UN General Assembly on Monday is due to hold a high-level summit to coordinate international responses to the refugee and migration crisis.

The IMF report followed Thursday's release of World Bank research which said the burden of large numbers of refugees and displaced persons was largely borne on the shoulders of poor countries, a fact that likewise called for coordination between humanitarian and development aid policies.

"To varying degrees, these countries face large numbers of refugees, weak confidence and security and declining social cohesion that undermines the quality of institutions and their ability to undertake much-needed economic reforms," the IMF report said.

In a sobering analysis, it laid out the economic costs of war for countries both plagued by conflict or bordering countries that are. - After four years of civil war, Syria's GDP has fallen by more than half.

War damage to Syria's physical capital amounts to $137.8 billion, or 230 percent of pre-war GDP, the report said, and, with 470,000 killed, 6.6 million displaced and 5 million having fled, the country has lost about 50 percent of its population.

The strains on governance, state revenues and state institutions such as central banks are profound: Preliminary data indicate that Yemen, for example, missed its 2015 revenue targets by as much as 60 percent.

The policy temptations for governments in such situations can also be harmful: pressed by dwindling revenues, states can be tempted to control exchange rates, and bias rules and taxation in favor of friends and against foes.

The IMF report said that war-struck countries can also struggle with high inflation even as government spending collapses.

Lebanon. For example, has enrolled half the Syrian refugee population's children in its schools, swelling classroom sizes and reducing the quality of education.

All of this called for change, the report said: more humanitarian aid but also a joining of forces between relief work and development assitance. In the near-term, funding has not kept pace with needs as UN agencies have had cut services to the refugee populations in Jordan.

But preventing poverty from rising in host countries is a pressing need, according to the report, and this requires investing in public infrastructure to create economic opportunities for the populations of the region.

If and when peace comes, reconstruction will require "sizable financing" largely surpassing damaged and indebted countries' ability to collect revenues.