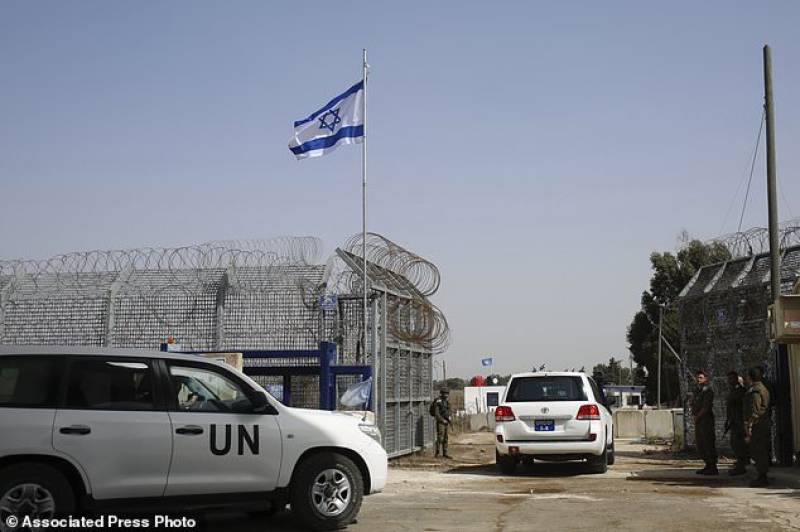 Golan Heights: Closed for years due to the civil war, Syria reopened a vital border post with Jordan as well as a crossing into the Israeli-controlled Golan, as President Bashar al-Assad's regime bolsters its control after sweeping advances against rebels.

Two white jeeps crossed into Israeli-controlled territory during a low-key ceremony to mark the reopening of the Quneitra crossing in the Golan Heights, four years after it was closed when Syrian rebels seized nearby territory.

Dozens of kilometres (miles) to the south and three years after it too was closed, a black metal border gate opened at the Nassib crossing into Jordan as police and customs officials stood nearby.

The Jordan crossing was previously a major trading route, while the remote Quneitra post is used primarily by a United Nations force which monitors a ceasefire line separating Israeli-occupied parts of the Golan Heights from Syria.

Their reopening were indications of a clear trend in Syria's civil war, with Assad's government -- backed by Russian and Iranian military support -- taking back huge swathes of land in the past year.

Also on Monday, Syrian Foreign Minister Walid Muallem said after talks in Damascus with his Iraqi counterpart Ibrahim Jaafari that the country's Albu Kamal border post with Iraq would also reopen "as soon as possible".

Even though Syria's government still controls only around half of the border crossings with its neighbours, Assad's forces have made major advances near Jordan and seized almost the entire province of Quneitra this summer.

Syrian businessman Hisham Falyoun, who lives in Jordan with his wife and children, was the first person to cross the border in his black Mercedes jeep.

"I wanted to be the first person to cross to show everyone that Syria is safe, Syria is back," said Falyoun, who was hoping to surprise his parents in Damascus.

The border crossing, known as Jaber on the Jordanian side and Nassib on the Syrian side, was a key trade route before Amman closed it after the post was overrun by rebels in April 2015.

In Quneitra, the reopening was the result of a deal between Israel, Syria and the United Nations.

It will allow forces from the UN Disengagement Observer Force (UNDOF), which has around 1,000 troops, to patrol the area of the crossing, after withdrawing in 2014 when Al-Qaeda-linked rebels overran the area.

Israel seized control of much of the Golan Heights from Syria in a 1967 war and later annexed it, in moves never recognised by the international community.

Many of the 18,0000 Druze Muslim residents of the region retained Syrian citizenship and will be able to use the crossing.

Nazeeh Ibrahim, 65, one of a handful of Golan Druze who witnessed Monday's opening, described the crossing as a "lifeline".

"We are Syrians and will remain so," he said, explaining he had family inside the country.

At first the crossing will only be open to UNDOF peacekeepers, an Israeli officer said, but is expected to be expanded to Druze residents in the coming months.

Israel had supported some rebel groups in the Golan during the seven-year Syrian civil war, seeking to create a buffer zone against Iranian influence.

Last month, it ended its 'Good Neighbour' support programme for rebels in the Golan that saw thousands brought to Israel for medical treatment, as well as aid shipped across the border.

It has expressed concern that Iranian-backed groups allied to Assad, including Lebanese militant group Hezbollah, could move into the Golan, creating a threat to Israeli cities.

So far there is no Hezbollah presence near the crossing, according to the Syrian Observatory for Human Rights, and the Israeli army has said it expects the UNDOF forces to keep "hostile groups" from the region.

The United States has welcomed the reopening, saying it would "allow UN peacekeepers to step up their efforts to prevent hostilities in the Golan Heights region".

For Eyal Zisser, director of the Middle East Studies Department at Tel Aviv University, the reopening forms part of a "return to normal".

"The border between Israel and Syria was very calm before the start of the Syrian civil war and the return to normal is very convenient for Israel," he said.

"There is no Daesh (the Islamic State organisation), no Iranians or Hezbollah, there is a clear address on the other side, that's all that Israel wants," he added.