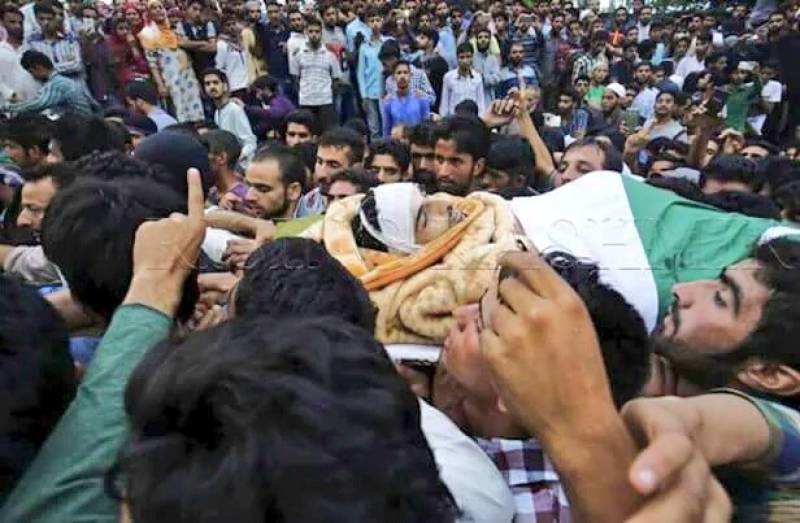 ISLAMABAD, Oct 16 (APP):  Dozens, in occupied Kashmir, were injured in Indian forces' action while protests and clashes broke out in various parts of the Valley as the ongoing uprising enters 100th day, today.

As many as 110 people have been killed while over 14000 have sustained injuries during the uprising, which erupted on 9th July,

a day after Hizbul Mujahdieen commander Burhan Muzaffar Wani was martyred by Indian troops in a fake encounter. More than 750 people have sustained pellet injuries in their eyes with majority of them on the verge of losing eye-sight partially or fully,reported Kashmir Media Service.

Reports from South Kashmir's Shopian district said at least 20 persons were injured when clashes erupted in Nagbal village against the beating and vandalizing of property by forces. The forces thrashed the inmates after barging into their houses in Urpara village at around 3:00am today.

The men in uniform damaged whatever came their way. Properties worth millions were vandalized by the forces. These included refrigerators, washing machines and vehicles.

Announcements were made through loudspeakers and people staged massive protests against the forces' action. "People from adjoining villages like Wedipora also rushed towards the village to protest. The forces fired pellets and bullets on protesters.

One of the youth has received fire-arm injury in his leg and was shifted to District Hospital Islamabad for treatment.

The police, however, said, "On a tip off, police and forces cordoned off the Urpora-Nagbal area and conducted search operations early morning. At the time of withdrawal people in large numbers from Hushnpora Daschnu and Humana etc. assembled and pelted stones on the joint party. Thirty eight police CRPF men were injured and four of their vehicles were damaged."

Late evening reports said that clashes erupted in Tahab area of Pulwama where forces fired dozens of tear gas shells in which three youth sustained injuries. One of them was referred to Srinagar for treatment.