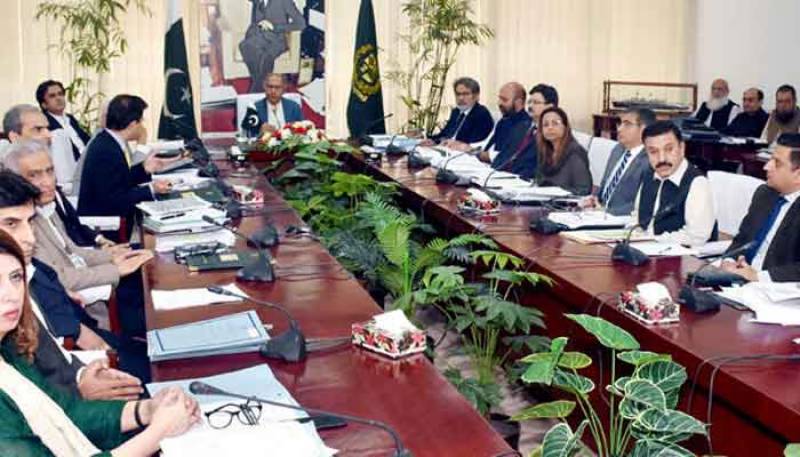 ISLAMABAD: The Executive Committee of National Economic Council (Ecnec) on Monday approved at least Rs309.282 billion worth of projects, including Dasu and Balakot hydropower, dualization of Kuchlak-Zhob road and Karachi development.

The Ecnec approved the projects at a meeting presided over by the Adviser to the Prime Minister on Finance and Revenue Hafeez Sheikh.

The council approved the revised cost for land acquisition and built-up of property for Dasu hydropower project (stage 1), subject to opinion of the law ministry after imposition of section 4 of Land acquisition Act of 1894. Sheikh said the law ministry might be requested to give its opinion in a week’s time to save the project from further delay.

The World Bank and Water and Power Development Authority are financing the 4,320 megawatts project.

The Ecnec also approved the project for the evacuation of 2,160MW power from Dasu hydropower project (stage 1) to Islamabad via Mansehra at a revised cost of Rs90.832 billion with foreign exchange component (FEC) of Rs79.584 billion.

The council considered and approved the engineering procurement and construction (EPC) of Balakot hydropower project, located in Manshera, Khyber Pakhtunkhwa, at a revised cost of Rs85.913 billion with the FEC of Rs35.049 billion. The provincial government will sponsor and execute the project with its financing coming from the Asian Development Bank (80 percent) and annual development program of the provincial government (20 percent).

The council approved revised cost of Rs5.812 billion, including FEC of Rs2.991 billion for the 220 kilovolts (kV) Head Faqirian Grid Station along with 220kV double circuit transmission line from Head Faqirian to Ludewala.

The Ecnec approved Khyber Pakhtunkhwa integrated tourism development project at the cost of Rs17 billion, including a World Bank’s loan of Rs14 billion and provincial government’s contribution of Rs3 billion.

The project will be completed by the end of fiscal year 2022/23. The council approved a revised cost of Rs63.602 billion – without FEC – for the dualisation of Kuchlak-Zhob road section of N-50 (305 kilometers), located in Balochistan.

The Ecnec approved Rs33.6 billion, including a World Bank loan of Rs32.2 billion, for the competitive and livable city of Karachi project, with the sponsorship of government of Sindh. The project will be completed by June 2024.

The Ecnec also approved the establishment of Pakistan Space Centre at Chakkri, Rawalpindi at an updated cost of Rs29.506 billion, including FEC of Rs22.096 billion.

The PM adviser asked the planning ministry to discuss the 500 transmission system between Tajikistan and Pakistan for Central Asia-South Asia transmission interconnection project with the stakeholders and bring it back in the next Ecnec meeting.

“Sponsors should justify land acquisition for Housing Complex without prior approval of Ecnec and award design work to consultants,” an official statement said.

“This approval would in no way constitute endorsement of the fiduciary/ management decisions of NPPMCL (National Power Parks Management Company) board regarding internal cost adjustments/re-appropriation within the approved PC-1, as these are not in the ambit of CDWP (Central Development Working Party)/Ecnec and are the responsibility of the board.”

Sheikh directed the Planning Commission to undertake an exercise of project evaluation before bringing the projects to the Ecnec. Adviser to the Prime Minister on Institutional Reforms Ishrat Hussain will lead the exercise for the evaluation of the projects.

The revenue adviser also formed a committee to look into the matter of filing a petition to Nepra for reference tariff for public sector power projects at EPC as well as commercial operation date stage.

The Ecnec further approved extension of intensive care department of mother-child health centre and children hospital at Pakistan Institute of Medical Sciences at an updated cost of Rs4.271 billion with FEC of Rs3.874 billion.

The council approved a revised cost of Rs4.629 billion for the establishment and operation of basic education, community schools in the country, subject to the condition that honoraria to remaining teachers with pending verifications might be made as per the Ecnec decision of January 9, 2019.

The Ecnec also gave prior approval for paying off major cost of the project till December 2019 with the instructions to devise a mechanism for facilitating the process of transition of the project to the provincial governments.

The ministry of inter provincial coordination, secretaries of ministry of federal education and professional training, provincial educational departments, finance and planning and development and Adviser to the Prime Minister on Institutional Reforms Hussain would devise a plan for the smooth transition of the program from the federal government to the provincial governments, as education is a devolved subject to be looked after by the provinces.

Minister for planning development and reforms, minister for finance Khyber Pakhtunkhwa, chairperson of planning and development Board Sindh and other senior officials of federal and provincial governments attended the meeting.