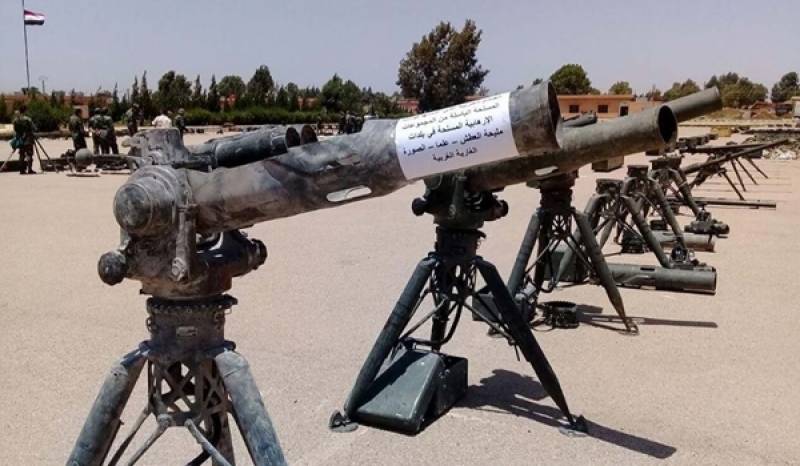 TEHRAN (FNA)- The Syrian Army troops found a large depot of Israeli and American arms and ammunition in terrorists' positions in Eastern Qalamoun in Damascus province months after the region's liberation, a media outlet reported on Sunday.

The Arabic-language website of Russia's state-run news agency, Sputnik, quoted a military source as saying that the army men continued cleansing operation in al-Petra region, Badiyeh (desert) and Eastern Qalamoun, discovering a large depot of arms mostly made in the US and Israel.

The report further said that the arms were sent to Eastern Qalamoun terrorists via Jordan and Badiyeh.

The report further said that the terrorists had hidden their arms and ammunition in underground hideouts, cemeteries, mountains and mines, adding that the army men found a large volume of Israeli and US-made arms, including TOW anti-tank missiles, missile launchers, cannons and anti-aircraft guns in terrorists' positions in Eastern Qalamoun.

The army's mop-up operation in Eastern Qalamoun which was freed in April is still underway.

On Saturday, the army units found an underground cache of weapons and ammunition of the ISIL during mop-up operations in the town of al-Hassarat in West of Albu Kamal region in Southeastern Deir Ezzur which included US and western-made mortars and RPGs, Grad missiles and satellite communication systems.

Also, the army forces in the town of Aqrab in Southwestern Hama found a hideout of terrorists which included a large number of weapons and ammunition as well as military equipment.

Meantime, field sources reported that the Syrian army troops found a large number of sniper guns made by the western countries, PKC machine-guns and different types of advanced military equipment.