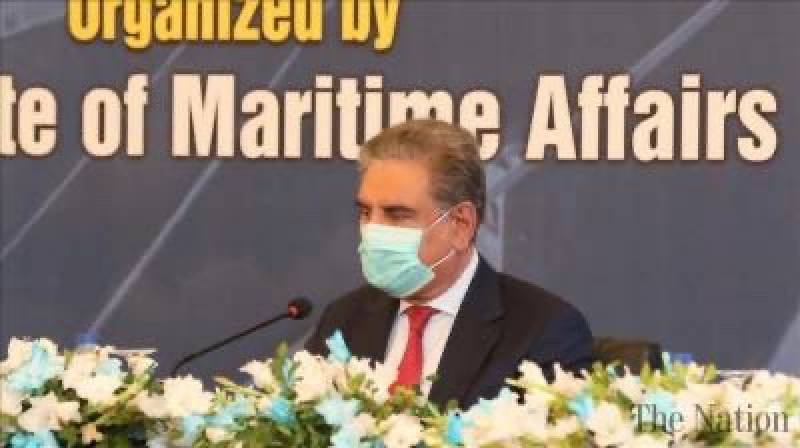 Speaking at the International Maritime Conference in the southern port city of Karachi, Qureshi said his country will continue to take all necessary measures to ensure its security and to maintain credible minimum deterrence, a statement from the Foreign Ministry said.

"The Indian Ocean offers promising potential for mutual cooperation and collaboration. But geostrategic competition and the pursuit of military dominance by some states have gravely jeopardized that potential," Qureshi said.

The foreign minister blamed that India’s belligerent and aggressive policies in particular, posed an immediate and pervasive threat to international and regional peace and security.

"The international community needs be cognizant of the fact that any military conflict in South Asia could endanger stability in a region that is critical for global trade flows and security," the minister said.

The conference was part of a week-long multinational naval exercise hosted by Pakistan, which began on Friday in the Arabian Sea.

With the participation of some 45 countries, including the US, Russia, China, and Turkey, significantly, this is the first time in a decade that Moscow has joined a military drill with NATO members. The last such time was the Brazen Monarch exercise off the coast of Spain in 2011.

The foreign minister termed the China-Pakistan Economic Corridor (CPEC) and the development of Gwadar Port as game-changing projects that further enhanced the geo-economic significance of Pakistan.

"The Gwadar Port, which occupies a strategic location overlooking the Strait of Hormuz and the North Arabian Sea has the potential to develop into a full-fledged regional hub and a trans-shipment port," Qureshi said.

The $64 billion CPEC – a network of roads, railroads, and pipelines – aims to link China's strategically important northwestern province of Xinxiang to the distant Gwadar port of Balochistan.

While the corridor will give China easy access to Africa and the Mideast, it will make Pakistan earn billions of dollars and spur business activities along the road network replacing the fabled Silk Road.

"Gwadar Port also provides new vistas for businesses. Extraction of life-saving medicines, coastal tourism, and the development of coastal real estate are industries that are attracting investment, both local and foreign," he said.