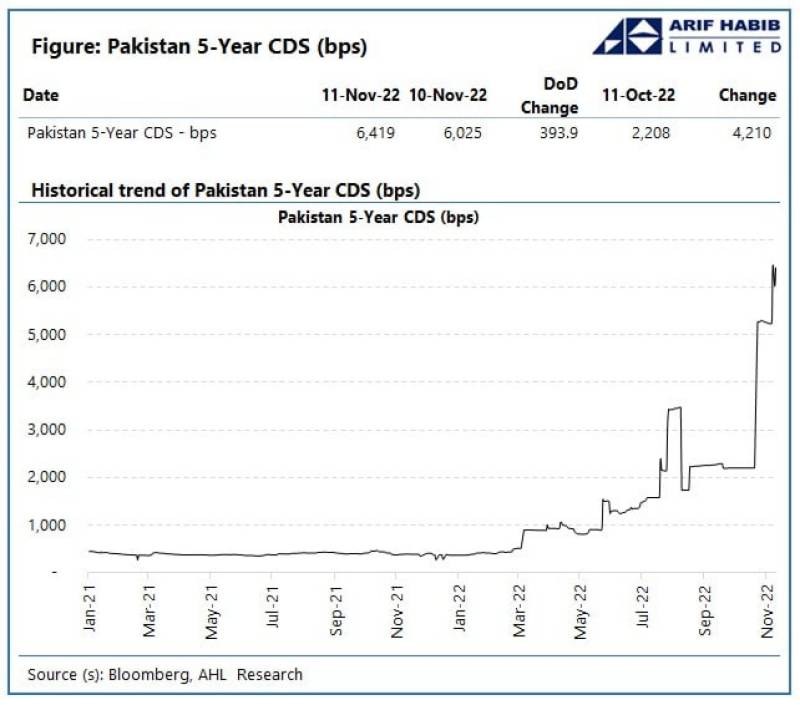 Pakistan’s default risk entered alarming new levels this week as the cost of ‘insuring’ the country’s sovereign debt shot up, scaring away investors.

According to data by Arif Habib Limited (AHL), Pakistan’s benchmark 5-year Credit Default Swap (CDS) spiked on 11 November by 394 basis points to 64.19 percent. The instrument has widened by over 4,200 basis points or 4.21 percent in a month, indicating that foreign investors are losing faith in Pakistan’s dollar-denominated maturities.

Last month, Fitch downgraded Pakistan’s long-term issuer default rating to CCC+ from B-, while Moody’s downgraded the country’s issuer and senior unsecured debt ratings to Caa1 from B3. Yields have spiraled down ever since and will only get worse if there’s no strategy in place to win back investor confidence. Commenting in this regard, independent economic analyst A H H Soomro said,

For non-finance people, simply speaking, the risk of a credit default – Pakistan’s ability to borrow and repay – is increasing. Investors are skeptical to lend to Pakistan given its poor track record, absence of structural reforms & now, the political uncertainty. New projects will be delayed or abandoned. Forex controls will be placed. Dollar will be a rare commodity and available only when absolutely necessary. Foreign investors will worry about dividend repatriation. The Richie Rich will not take additional risks, hence no new jobs.

He said the problem is homegrown and the solution is political willpower. “There are other ways to effect change. Ask for an early election and being ready for electoral reforms than agitations to repeat Sri Lanka-esque regime change effecting an economic default,” he added.

The country’s ongoing problems are compounded by recent floods estimated to cost over $30 billion in damages, and the spiraling uncertainty in its external liquidity conditions isn’t helping. “World Bank and ADB are back to lending spree as UAE, KSA & China extend debt relief. However, it is only a temporary breather,” stated Soomro.