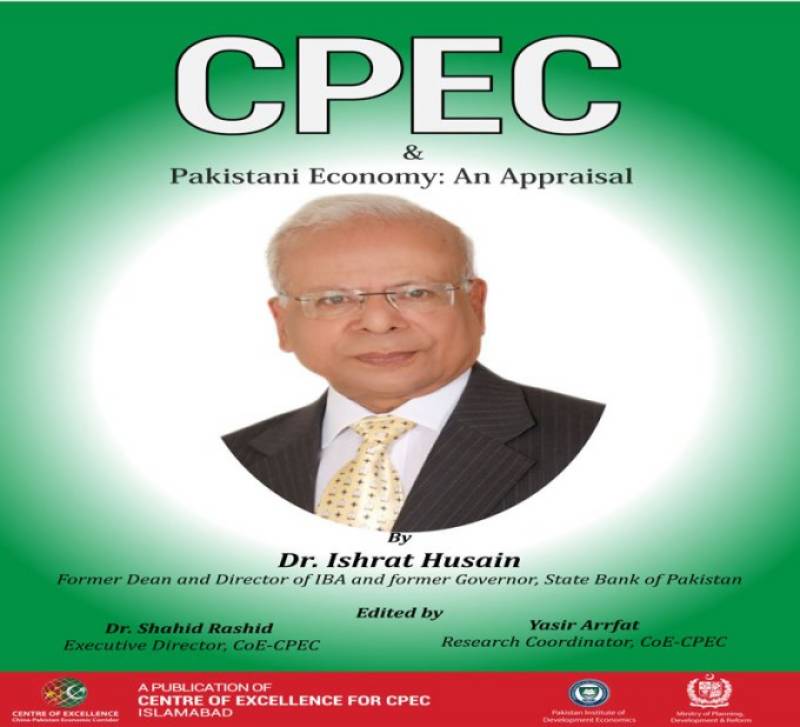 ISLAMABAD - Centre of Excellence-CPEC (CoE-CPEC) a think tank runs by Pakistan Institute of Development Economics (PIDE) and the Ministry of Planning, Development & Reform (MoPDR) held a launching ceremony at Serena Hotel today of its publication, “CPEC and Pakistani Economy:

An Appraisal” which is a combined effort of H.E. Dr. Ishrat Husain and Centre of Excellence-CPEC, Islamabad to disseminate the most updated and authentic information about CPEC. We are sure that this booklet will go a long way by serving our effort to reach out all the relevant quarters and stakeholders including masses to know about the ongoing and futuristic projects of CPEC.

Dr Shahid Rashid commenced the event with his note of thanks to Dr Ishrat Hussain for writing this booklet and said it is a matter of honour for COE-CPEC to publish the bunch of this insightful information which will prove to be an asset for CPEC policy-making and its implementers.

Shoaib A. Siddiqui, Secretary (MoPDR) thoroughly appreciated DR. Ishrat Hussain endeavour’s to write such a masterpiece which is holistic in nature about CPEC multifaceted aspects. He succinctly explained the chapters of the book and viewed that this is a must read study not only for the Pakistanis but also the Chinese can take benefit and enhance their vision about CPEC vitality for Pakistan and beyond.

Dr Ishrat Hussain deliberated upon the intention of writing this book, according to him; one of the common reservations expressed about CPEC is that it lacks transparency and non-availability of complete information. He added that the terms and conditions of financing at which the Chinese companies are participating in these projects are not fully known and the likely future financing burden on Pakistan’s balance of payments is not obvious. There was also a very common question has been raised about the socioeconomic benefits, particularly about job opportunities. This booklet attempts to address some of these issues to the extent that the projects have been planned, agreed upon, finalized and implementation is underway.

Only approximately half of $ 45 billion committed originally for CPEC would be utilized for these projects. Pakistan’s liability is therefore at present limited to this $ 23-25 billion only. Many other projects are at feasibility stage, discussion or negotiation stage between the two governments or on hold. No amount has either been committed or disbursed for these projects and the liability of Pakistan has not yet arisen.

Ms Sumaira Nazir Siddiqui, Secretary Board of Investment and Dr Safdar A. Sohail, Director General (National Institute of Management) also reflected their thoughts about the booklet and lauded the importance of such publications by the COE-CPEC.

Chinese Ambassador Yao Jing concluded the session with a view that,” it is an immense pleasure for him to inaugurate this booklet which “Dr Ishrat Hussain’s book is a great initiative to dispel the misconceptions pertaining CPEC”. He also appreciated the role of CoE-CPEC in policy shaping, evidence-based research work and other tasks in furtherance of CPEC.