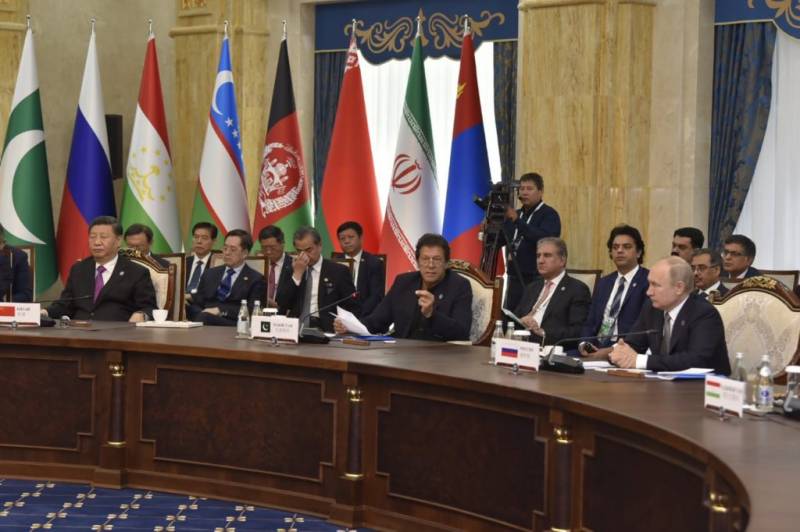 Prime Minister Imran Khan has urged the member states of Shanghai Cooperation Organization to finalize arrangements for trade in local currencies, and set up SCO Fund and SCO Development Bank to catalyze the trans-regional development agenda.

He was presenting his eight eight-pronged course of action for SCO on the turf of international politics at the 19th meeting of SCO Council of Heads of State in Bishkek, Kyrgyzstan on Friday.

The Prime Minister said we should reinforce our vision of cooperation, that rejects confrontation, and advance the imperatives of peaceful co-existence at the regional and international levels.

He said the SCO member states should galvanize the "Shanghai Spirit" to strengthen the organization's core mandate of mitigating the risks of conflict, fostering confidence, and promoting stability.

Imran Khan emphasized on making SCO more relevant to the daily lives of citizens by promoting food security and enhancing cooperation in health and humanitarian sectors.

He said SCO should take the lead role in establishing a comprehensive framework for combating corruption and white collar crime.

The Prime Minister said SCO should prioritize women and youth empowerment by focusing inter-alia on strengthening the Women Forum and the Youth Council and mandating them to promote gender mainstreaming, skills acquisition and jobs mobility.

He said SCO member countries need to bridge the gap between region-specific research and policy by launching feasibilities for creating SCO Centres of Excellence on Poverty Alleviation, De-Radicalization, Connectivity, and New Technologies.

Imran Khan said enduring peace and prosperity in South Asia will remain elusive until the main dynamic in South Asia is shifted from confrontation to cooperation.

He said it is important to seize the opportunities for peaceful resolution of outstanding disputes and collective endeavours for regional prosperity.

The Prime Minister said Pakistan condemns terrorism in all its forms and manifestations, including State-terrorism against people under illegal occupation.

He said we are among the few countries to have successfully turned the tide against terrorism.

He said Pakistan remains ready to share its experience and expertise in counter terrorism. We will also remain actively engaged in SCO's counter-terrorism initiatives.

Referring to the Afghan issue, the Prime Minister said there is finally a realization that the conflict in Afghanistan has no military solution.

He said Pakistan is fully supporting efforts for peace and reconciliation, through an Afghan-led and Afghan-owned process.

The Prime Minister said we deem this to be part of a shared responsibility and, therefore, appreciate the positive contributions being made by China, Russia and Afghanistan's immediate neighbours.  He said SCO's support for post-conflict Afghanistan will remain crucial.

Expressing concern over evolving situation in the Gulf and Middle East, the Prime Minister said we join the SCO members in urging the parties to exercise restraint, take steps to de-escalate the situation, and find solutions through diplomatic means.

He said we believe implementation of the Joint Comprehensive Plan of Action by all parties is essential for international and regional stability.

The Prime Minister said Pakistan provides the vital connectivity between the Middle East and China and Central and South Asia. These geographic proximities and economic imperatives draw us closer to SCO.

He said Pakistan is an attractive investment destination and a large market endowed with a rich array of resources.

He said we build partnerships based on mutual respect, sovereign equality and equal benefit.

He said Gwadar Port, at its southern end, marks the only point of convergence of the maritime Belt and the overland Road.

He said CPEC is destined to catalyze the creation of an integrated pan-Asian sphere of shared prosperity.

Afghan President Ashraf Ghani says reaching a peace agreement with Taliban is a key component for reduction in violence in Afghanistan.

Addressing at the Shanghai Cooperation Organization’s summit in Bishkek in Kyrgyzstan, he said breakthrough in the Afghan peace process will take time.

Ghani said although Afghan war is multi-dimensional, however, reaching a peace agreement with the Taliban is a key component for the reduction of violence.

Iranian President Hassan Rouhani has said that U.S. actions pose a serious threat to stability in the Middle East.

Talking to head of states including China, Russia and India on the sideline of SCO summit in Bishkek today, Iranian President denied any connection with the attacks on oil tankers in Gulf of Oman.

He said Iran continued to honor the accord and ask the remaining parties in the nuclear deal to immediately fulfill their commitments.