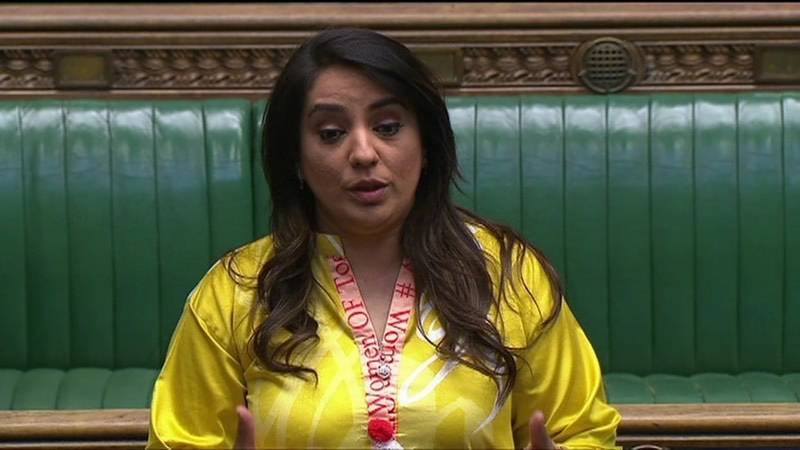 *Karachi - British Parliamentarian Naz Shah has said that from 2015 onwards, Britain sold more than half a billion pounds-worth of arms to India, which will contribute to shedding the blood of the Kashmiri people.*

Addressing the UK Parliament on "End the siege in Kashmir", Shah said: "Without the reassurances from the UN, we cannot be sure that we are not contributing to a genocide."

She stated, "As a proud daughter of Kashmir, I simply ask the Minister whether the Prime Minister, who has now cancelled his visit to India, will follow on and cancel the shipment of arms to India?"

She said we do not need international leaders and governments protesting with words; we have activists on the streets for that. "We need international leaders and governments with the will to take action and stop genocide taking place. The time to act is now. Will the minister act now while there is still time, or history will not be so forgiving?"

Quoting President Truman's words, she said: “If we had had this Charter a few years ago—and above all, the will to use it—millions now dead would be alive. If we should falter in the future in our will to use it, millions now living will surely die.”

Naz Shah pointed out that the charter lives on today but, tragically for the people of Kashmir, the will to use it does not.

Shedding light on India's brutality in Indian Illegally Occupied Kashmir, the British lawmaker mentioned that from the start of 2010 to the 2019 siege, the Kashmiri people have been shut off from the entire world—occupied by more than 600,000 Indian soldiers, in the largest military operation in the world; Kashmiri women targeted for rape; 250 Kashmiris killed; 1,500 injured; 657 houses destroyed; 4,815 cordon and search operations during the past one year alone.

She stated that several political leaders are under house arrest while thousands of non-Kashmiri Hindus of India issued with domicile certificates.

She said the Indian Government proactively changed the very demographics of Kashmir, leading only to a path of ethnic cleansing of Kashmiri people. "Without the UN rapporteurs allowed into the region, and with every report out of the region censored, how can anyone assure this House that a genocide in Kashmir is not taking place?" she questioned.