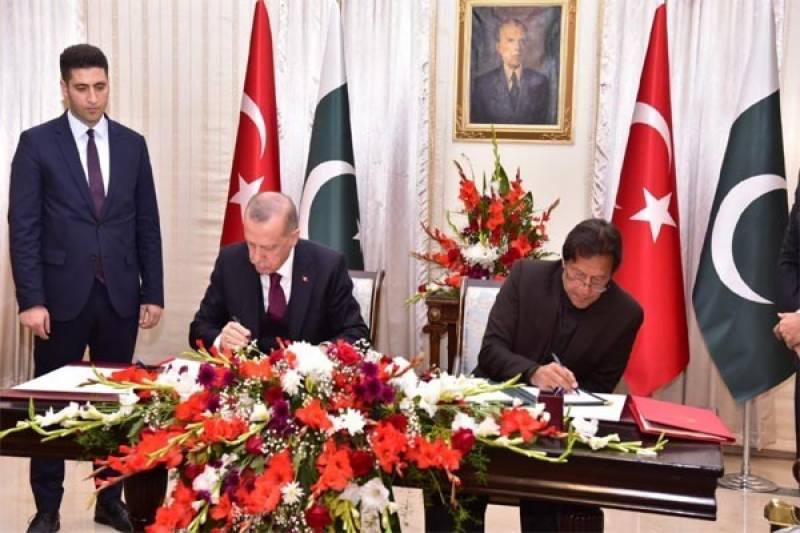 ISLAMABAD - Pakistan and Turkey Friday signed 13 documents of cooperation, including agreements, protocols and memorandums of understanding, to boost bilateral ties in the fields of trade, tourism, defence and infrastructure development.

The documents of cooperation were signed in a ceremony held here at the PM House during the visit of Turkish President Recep Tayyip Erdogan following his one-on-one meeting with Prime Minister Imran Khan and the delegation level talks.

The two leaders also witnessed the signing ceremony, besides the members of the Turkish delegation and federal cabinet members.

Pakistan and Turkey signed a declaration of Strategic Economic Framework between the two countries inked by Prime Minister Imran Khan and President Erdogan, besides a joint declaration on the visit.

Pakistan and Turkey signed an agreement to strengthen cooperation for development of tourism and the signatories were Minister for Inter-Provincial Coordination Dr Fehmida Mirza and Turkish Deputy Minister for Culture and Tourism Dr Serdar CAM.

An MoU was signed by Minister for Science and Technology Chaudhry Fawad Hussain and Turkish Trade Minister Ruhsar Pekcan for cooperation in the field of Halal Accreditation between the two countries.

Similarly, another MoU was signed by Railways Minister Sheikh Rasheed Ahmed and Turkish Transport and Infrastructure Minister to increase cooperation in the field of railways.