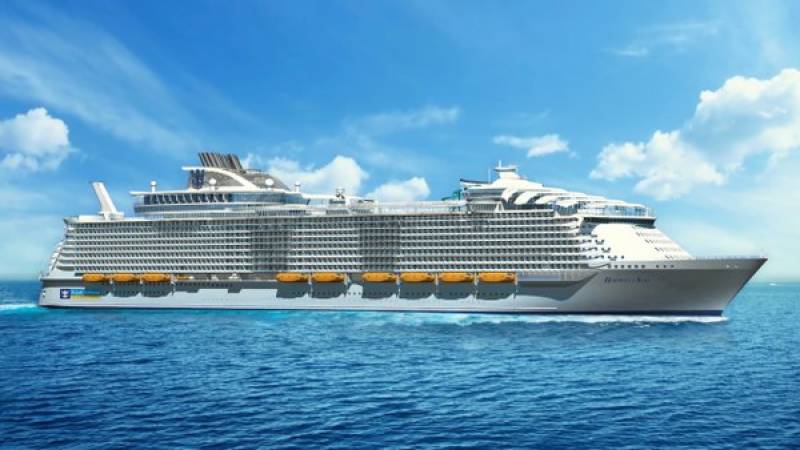 The world's biggest cruise ship opened its doors to reveal a mini-city inside as it was handed over to its American owners by French shipyards.

The ship- Harmony of the Seas is 50 metres taller than the Eiffel Tower at 362 metres. It is 66m wide, the widest cruise ship ever built and weighs over 120,000 tonne.

The ship will be able to carry 6,360 passengers and 2100 crew members.The ship was built for the US-based Royal Caribbean Cruises Limited by the STX France yard in Saint-Nazaire on the Atlantic coast.

"It's not only the biggest cruise ship in the world, it's also the most expensive ever built," said Richard Fain, head of RCCL, during its launch ceremony, Private news channel reported.

Onboard attractions include "The Ultimate Abyss", a 10-storey slide from the top deck to the main deck which RCCL claims is the world's biggest ship-mounted waterslide.

Other attractions include, a giant climbing wall, a rope slide, mini-golf, floating Jacuzzis, casino and a 1400-seat theatre.

Two robot barmen will serve passengers in the "Bionic Bar".

The ship even has a shopping street and park featuring 12000 plant species. Construction of the ship began in September 2013 and it took 2500 workers to complete the vessel.

STX has built 120 cruise ships over its 150 years, and has another 11 lined up for the next decade. The ship will leave the port on Sunday.

It will begin its first voyage on May 22 to its home port Barcelona.Regular cruises will start through late October.