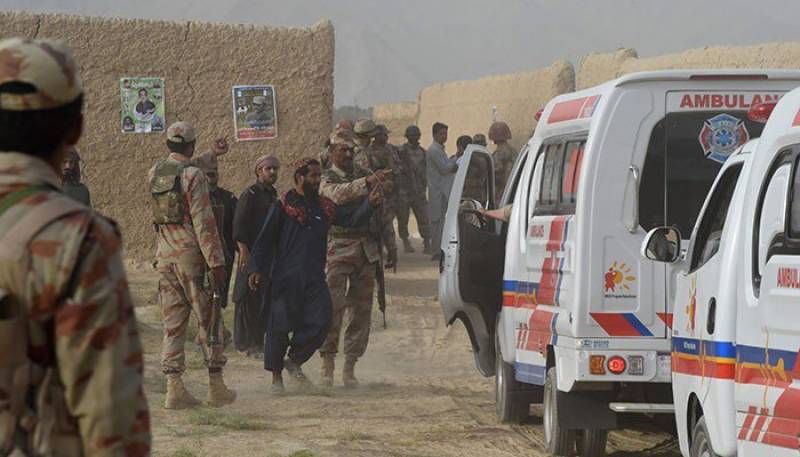 QUETTA: The Balochistan government has announced two-day mourning in the province after a suicide blast at a political rally in Mastung martyred 128 people and injured more than 150, in one of the deadliest attacks in the country's history.

Among the martyred was Nawabzada Siraj Raisani, who was running for a provincial seat with the newly-formed local Balochistan Awami Party (BAP).

Authorities said the suicide bomber detonated in the middle of a compound where the political meeting was taking place, in Mastung's Darengarh area. The blast was the latest in a string of attacks that have spurred fears of violence ahead of the general election on July 25, and came hours after four people were killed and 39 injured in a bomb blast targetting a JUI-F convoy in Bannu on Friday.

The national flag is at half-mast at all public buildings in the province. The BAP has also cancelled its election rally in Quetta today in memory of the deceased.

The Pakistan Bar Council has announced two-day mourning and is boycotting all court proceedings today in condemnation of the tragedy.

Levies personnel said on Saturday that evidence is being collected from the site of the attack, which has been secured by the forensics team. A case would be registered against the attack once all necessary proceedings have been conducted.

The authorities will take assistance from the Punjab Forensics Laboratory to probe the attack, the levies officials added.

Siraj Raisani to be laid to rest in Mastung

BAP candidate Siraj Raisani, who was martyred as the suicide blast ripped through the election rally when he took the stage, will be laid to rest in Kanak, Mastung.

His funeral prayers will be offered in Quetta at 3pm today.

Raisani was recently elected as the chairperson of Balochistan Muttahida Mahaz and merged his party with the Balochistan Awami Party on June 3. He was scheduled to contest for PP-35 (Mastung).

The deceased had lost his son Akmal Raisani in a bomb blast at Mastung in July 2011.

The Mastung attack was the most lethal since Taliban militants assaulted Peshawar’s Army Public School in 2014, killing over 150 people, mostly children, and one of the deadliest in the country´s long struggle with terrorism.

On Tuesday, a bomb targeted a rally by the Awami National Party (ANP) in Peshawar, martyring local ANP leader Haroon Bilour along with 21 others. Thousands flocked to his funeral the next day.

The military has warned of security threats in the run-up to the election on July 25, and said it will deploy more than 370,000 soldiers on polling day.

The fresh spate of violence was strongly condemned by political leaders and Chief of Army Staff General Qamar Javed Bajwa, who expressed sorrow over the loss of innocent lives and vowed that attempts of inimical forces to derail important democratic activity shall not succeed.

The United States condemned the fresh spate of terrorism in Pakistan, dubbing the attacks as “cowardly attempts to deprive the Pakistani people of their democratic rights.”

“The United States strongly condemns this week’s attacks on political candidates and their supporters in Balochistan and Khyber Pakhtunkhwa provinces of Pakistan. These attacks are cowardly attempts to deprive the Pakistani people of their democratic rights,” US Department of State spokesperson Heather Nauert said in a statement.

“We grieve with those mourning the victims, and hope for a rapid recovery of those injured. We will continue to stand with the people of Pakistan and the broader South Asia region in their fight against terrorism,” the statement added.

The European Union condemned the deadly blast, and urged for swift justice for the victims.

The British High Commission in Pakistan also issued a condemnation against the terrorist attack. "A terrible day. We join our Pakistani friends in our thoughts for the victims of these cowardly attacks and in condemning their perpetrators. No one can be allowed to thwart the country’s democratic process. #Mastung #Bannu," High Commissioner Thomas Drew tweeted.