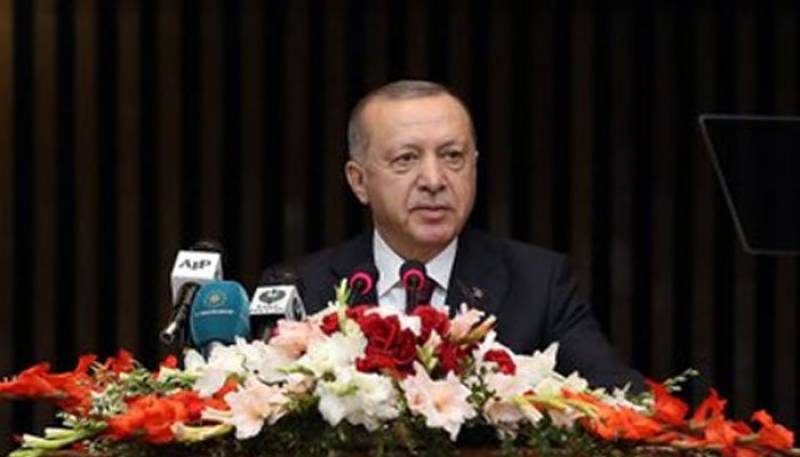 ISLAMABAD: Turkish President Recep Tayyip Erdogan on Friday vowed unflinching support for Pakistan on the issues related to anti-terror financing and the illegal annexation of occupied Kashmir by India. The Turkish president made the remarks while addressing a joint session of the parliament.

Erdogan further thanked the Pakistani people and leadership over the warm welcome he was accorded upon arrival. “It is my pleasure to speak to you. I am thankful to you for giving me the opportunity to address this house.” “While in Pakistan, I feel like I am at home,” he said. 'Pakistan's pain is our pain'

"Today, Pakistan and Turkey's relations are admirable for others. During difficult times, Pakistan has supported Turkey," Erdogan added. “Our friendship is based on love and respect. Pakistan’s pain is our pain,” the Turkish president remarked.

Speaking about the issue of occupied Kashmir, the Turkish president said that Indian-occupied Kashmir meant to Turkey exactly what it had meant to Pakistan over the years. "The relationship between Pakistan and Turkey will continue in the future like it has in the past," he added.

In his speech, the Turkish president also said that Turkey had supported Pakistan on matters related to counter terrorism. "We assure Pakistan of Turkey's support at the Financial Action Task Force," Erdogan said.

"The positive steps taken by Pakistan with regards to investment and trade are improving conditions for business in the country. Economic progress is not achieved in a few days, but takes constant effort," the Turkish president said.

Chairman Senate Sadiq Sanjrani, Speaker of the National Assembly Asad Qaiser, Governor Sindh Imran Ismail, and other top officials, including the service chiefs of the armed forces, were also present on the occasion.