Dubai to witness driverless flying cars on its skies
14 Feb, 2017 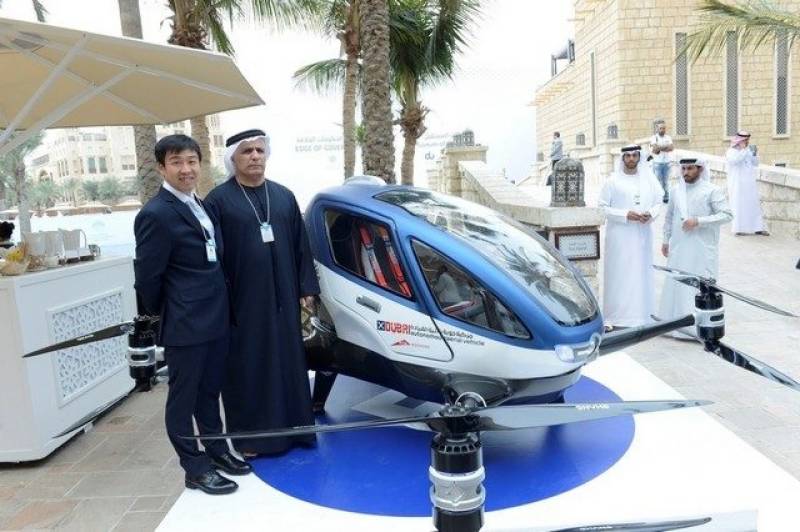 DUBAI: Dubai skies are set to be abuzz with driverless flying cars within months, the emirate’s Roads and Transport Authority (RTA) announced on Monday, in what will mark another world’s first for the city.

The RTA, in collaboration with the Chinese firm Ehang, has carried out the first test run of an autonomous aerial vehicle (AAV) capable of carrying a human, the Ehang 184, and the authority said it is set to launch operations very soon.

The flying car was exhibited at the World Government Summit in Dubai this week and the chief of the RTA said a summer start date for flights is envisioned.

“The AAV exhibited at the summit is not just a model; it is a real version that we have already experimented the vehicle in a flight in Dubai sky. The RTA is making every effort to start the operation of the AAV in July 2017,” said Mattar Al Tayer, the director general and chairman of the RTA.

The Ehang 184 is fitted with a touchscreen to the front of the passenger seat displaying a map of all destinations in the form of dots.

It has preset routes and the passenger selects the intended destination. The vehicle will then start automatic operation, take off and cruise to the set destination before descending and landing in a specific spot. A ground-based centre will monitor and control the entire operation.

“The trial run of the first AAV is in implementation of the directives of Sheikh Mohammed bin Rashid Al Maktoum, Vice-President and Prime Minister of the UAE and Ruler of Dubai, to transform Dubai into the smartest city in the world,” said Mr Al Tayer

“It is also part of the RTA’s endeavors to provide self-driving transport through engaging in the technological tests of self-driving vehicles in a Dubai environment.

“The step would also enhance the integration between public transport modes and people happiness through the provision of smooth, quick and innovative mobility.

“We have addressed the highest levels of security in the designing and manufacturing of the Ehang184. The vehicle is fitted with eight main propellers,” Mr Al Tayer said.

The AAV is fitted with numerous basic systems all in operation at the same time, although independently.

“In case of any malfunctioning in one of these systems, the standby system would be capable of controlling and safely steering the AAV to the programmed landing point,” Mr Al Tayer said.

The AAV is designed to fly for maximum of 30 minutes at a maximum cruising speed of 160kph, and the standard speed in Dubai is likely to be set at 100kph.

The ascending/descending speed is about 6 metres per second and the landing speed is 4m/s. The vehicle is 3.9 metres in length, 4.m wide and 1.6m high. It weighs about 250kg empty and about 360kg with an average passenger. The maximum cruising height is 3,000 feet and the battery charging time is one to two hours.

“The AAV is designed to operate under all climatic conditions unless there is a thunderstorm. The vehicle is fitted with highly accurate sensors with a very low-error threshold and can resist vibrations and extreme temperatures,” said Mr Al Tayer.

“Dubai Civil Aviation Authority was a partner in our trials defining the safety criteria required, issuing the permits for trial and inspecting the vehicle, RTA appreciates their contribution.

Etisalat had contributed as well to the success of the test run of the AAV in its capacity as a prime network provider, Mr Al Tayer added.

For residents, the chance to beat the traffic jams in a flying car is probably something many have dreamed about. And now it looks set to become a reality.