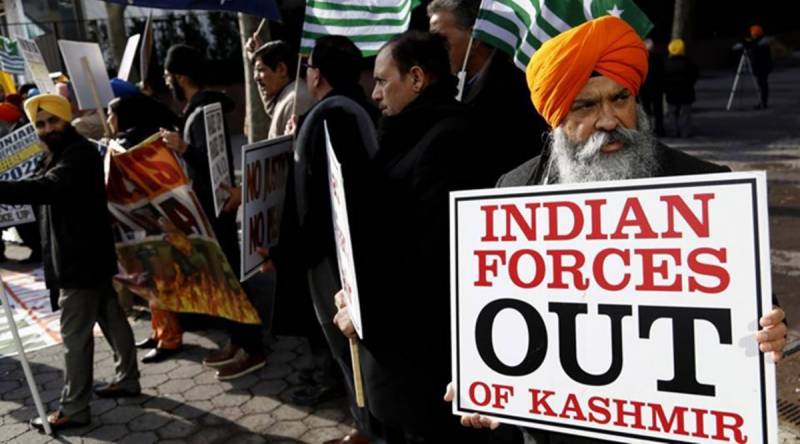 NEW YORK - A group of Sikhs has protested against alleged atrocities perpetrated against minority communities in India during the commemoration of Babasaheb Ambedkar’s 127th birth anniversary at the world body’s headquarters.

India’s Permanent Mission to the UN had organised a special event titled ‘Leaving No One Behind’ at the UN yesterday to celebrate Ambedkar’s 127th birth anniversary. UN Development Programme (UNDP) Administrator Achim Steiner delivered the keynote address at the event.

As India’s Permanent Representative to the UN Ambassador Syed Akbaruddin began his opening remarks at the event, a group of Sikhs stood up in the conference room and held up posters that read ‘Minorities Under Threat’ and ‘Never Forget 84’ alongside pictures of Ayodhya’s Babri Masjid and the Golden Temple in Amritsar.

Akbaruddin faced huge embarrassment by the protest and continued to deliver his speech. The Sikhs had tied black bands on their turbans and protested for the entire duration of Akbaruddin’s remarks, holding up the posters for the attendees to see.

As soon as Akbaruddin concluded his remarks, the group left the conference room. Outside the room, UN police and security personnel assembled and questioned the Sikhs, inspecting their posters and inquired about whether they had permission and valid passes to enter the UN.

One of the protesters, Sabjeet Singh of the Shiromani Akali Dal Amritsar USA told PTI that Ambedkar’s vision was to ensure equality for all communities, minorities and Dalits and he had enshrined this in the Indian Constitution.

“But the BJP government that has come to power in India wants to build a Hindu nation. They are committing atrocities against Sikhs, Christians, Muslims, Dalits. We are here to peacefully convey the message on behalf of all the minority communities in India that Ambedkar’s vision of equality remains unfulfilled,” he said.