Pakistan escapes embarrassment at historic test against Ireland
13 May, 2018 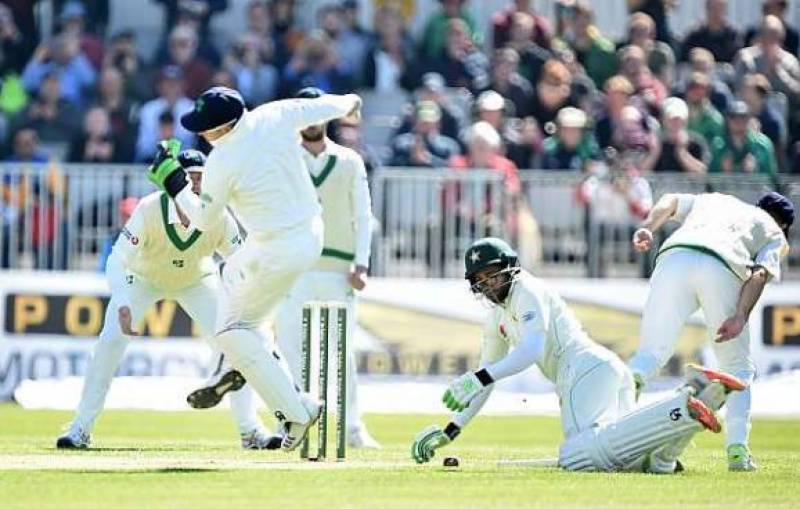 ISLAMABAD - A century stand for the seventh wicket turned around Pakistan’s innings and left Ireland ruing missed opportunities at Malahide. Both Shadab Khan and Faheem Ashraf recorded half-centuries as Ireland’s fortunes dipped following an encouraging start with the ball.

Faheem, Pakistan’s debutant allrounder, had two significant let-offs: Gary Wilson could not get his fingers under a low chance at first slip on 24, when Tim Murtagh nibbled the ball away, while another thick edge on 36, drawn by Boyd Rankin, evaded Wilson after Niall O’Brien dived across him.

That came in an over which cost 18 as Faheem went to a 52-ball half-century. Shadab was initially more attacking but settled down to reach his own fifty, from 89 balls, as Pakistan fought their way into a more comfortable position. Shortly afterwards, with the second new ball nearing, the umpires took the players off for bad light.

Pakistan, who had seen Shafiq make 62 as they recovered from losing two wickets in successive balls to be 13 for two, were 193 for six at tea on the second day after being sent into bat by Ireland captain William Porterfield following Friday´s first-day washout.

Boyd Rankin, the 15th man and the first since Kepler Wessels (Australia and South Africa) 25 years ago to play Test cricket for two nations after making a lone appearance for England, had the honour of taking Ireland´s first Test wicket.

At tea, Tim Murtagh and fellow pacemen Rankin and Stuart Thompson had taken two wickets each. Murtagh had two for 30 in 14 overs, Rankin two for 33 in 14 and Thompson a slightly more expensive two for 47 in 13, with Ireland opting against including a specialist spinner in their XI.

Shadab Khan was 25 not out and Faheem Ashraf, making his debut, 15 not out at the interval. Only Shafiq and Haris Sohail (31), who put on 58 for the third wicket, had yet to make more than 30 in the innings.

There was drama at a sun-drenched Malahide even before the wickets fell, with Pakistan debutant Imam-ul-Haq injured off the first ball of the match.—AFP