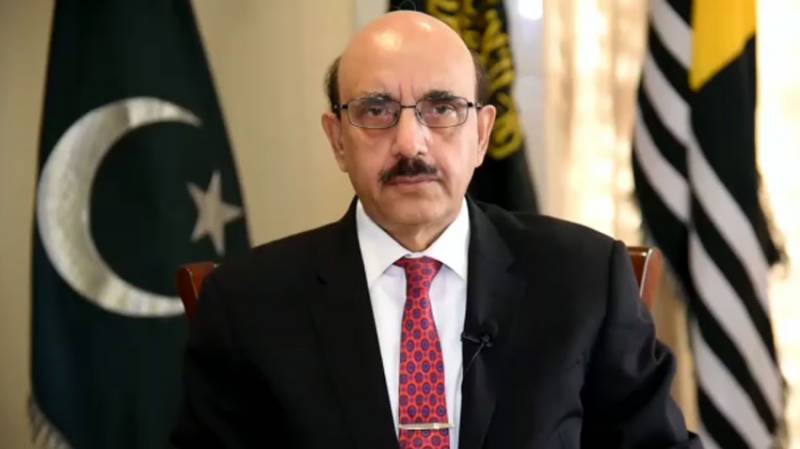 ISLAMABAD-MIRPUR (AJK),Azad Jammu and Kashmir (AJK) President  Sardar Masood Khan Monday expressed his deep gratitude to the British and European Parliamentarians for their abiding and steadfast cross-party support to the Kashmiris’ right to self-determination and protection of their human rights.

“At this crucial hour, we need their voice and outreach to their respective governments, the United Nations and relevant multilateral institutions to build pressure on India to stop forthwith massive transfer of its population to the disputed Indian Occupied Jammu and Kashmir in violation of the 4th Geneva Convention and customary international law”.

The President made these remarks while addressing a convention organized by and international Kashmir Loby Group, TehreeK-e- Kashmir Europe through a video link, AJK President office told media.

Addressing as Chief Guest of the event, the AJK president described New Domicile Rules, modeled on last century’s Nuremberg Laws by the Nazi Party as a war crimes.

He acknowledged the efforts of the UK’s All Party Parliamentary Group on Kashmir and hundreds of European Parliamentarians, who had tabled half a dozen resolutions in March this year demanding a UN-led resolution of the Jammu and Kashmir dispute.

We would continue to rely on their goodwill, Parliamentary networking and diplomatic skills to seek justice for the people of Jammu and Kashmir,” Khan said.

He also cherished the role of Kashmiri diaspora communities settled in the United Kingdom and Europe for highlighting atrocities being committed by India in the disputed territory.

Appreciating the Threek-e- Kashmir’s efforts in highlighting the plight of Kashmiris, the president said the group led by Muhammad Ghalib and Raja Faheem Kiani is doing a remarkable job for raising awareness about the Kashmir dispute and atrocities being committed by Indian occupation forces across Europe.

He said that it was a matter of great satisfaction that members of diaspora community ware now quite active from Europe to America. However, there was a need to more familiarize our younger generation residing abroad about our history, sacrifices rendered by our forefathers and the genesis of Kashmir issue.

He said due to untiring efforts of Tehreek-e- Kashmir UK, more than 50 MPs UK Parliament participated in a conference on Kashmir on February 4 in British parliament where both Conservatives and Labour lawmakers jointly supported Kashmiris right to self-determination movement and condemned the lockdown of the disputed valley.

Masood Khan also thanked Tehreek Kashmir’s leadership for holding a special event to mark the Kashmir Martyrs Day.     He expressed his optimism Tehreek Kashmir and community organization’s outreach to British and European Parliaments would muster required support for the besieged people of Occupied Jammu and Kashmir.