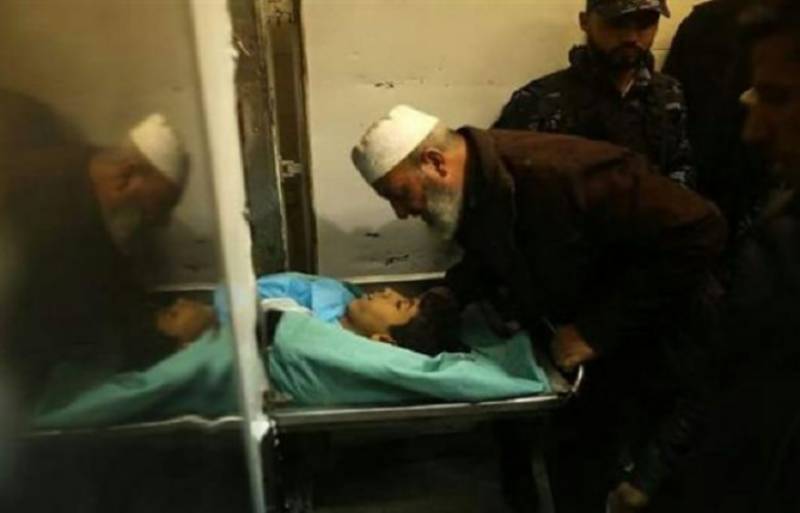 ISLAMABAD - Israeli forces have separately shot dead two Palestinian teenage boys in the central part of the besieged Gaza Strip and the occupied West Bank during clashes in protest at US President Donald Trump's recognition of Jerusalem al-Quds as the capital of Israel. Spokesman for the Gaza Ministry of Health, Ashraf al-Qidra, said in a statement on Thursday evening that 16-year-old Amir Abdelhamid Abu Mousaed sustained grave gunshot wounds in the chest near the border fence east of al-Bureij camp.

The Palestinian teen succumbed to his wounds after he was taken to al-Aqsa Martyrs hospital in Deir al-Balah city, located over 14 kilometers (8.7 miles) south of Gaza City, the statement added.

On December 6, Trump announced his decision to recognize Jerusalem al-Quds as Israel’s capital and relocate the US embassy in Israel from Tel Aviv to the occupied city.

On December 21, the United Nations General Assembly overwhelmingly voted in favor of a resolution that called on the US to withdraw its controversial recognition of Jerusalem al-Quds as Israeli “capital.”

In an attempt to prevent the resolution from being passed by UN members, Trump had warned that “we’re watching,” thus threatening reprisals against countries that would back the measure, which had earlier faced a US veto at the UN Security Council.

Israel, however, rejected the world body’s resolution while thanking Trump for his decision to move the US embassy from Tel Aviv to Jerusalem al-Quds.

Jerusalem al-Quds remains at the core of the Israeli-Palestinian conflict, with Palestinians hoping that the eastern part of the city would eventually serve as the capital of a future independent Palestinian state.

In a series of tweets on January 2, Trump said the US paid “the Palestinians hundreds of millions of dollars a year” and yet gets “no appreciation or respect.”

“But with the Palestinians no longer willing to talk peace, why should we make any of these massive future payments to them?” he asked.

Hanan Ashrawi, a member of the executive committee of the Palestine Liberation Organization, stated on Wednesday that “Palestinians' rights are not for sale.”

She added, “By recognizing occupied al-Quds as Israel's capital, Donald Trump has not only violated international law, but has also singlehandedly destroyed the very foundations of peace and condoned Israel's illegal annexation of the city."

Ashrawi further said, “We will not be blackmailed. President Trump has sabotaged our search for peace, freedom and justice. Now he dares to blame the Palestinians for the consequences of his own irresponsible action!”