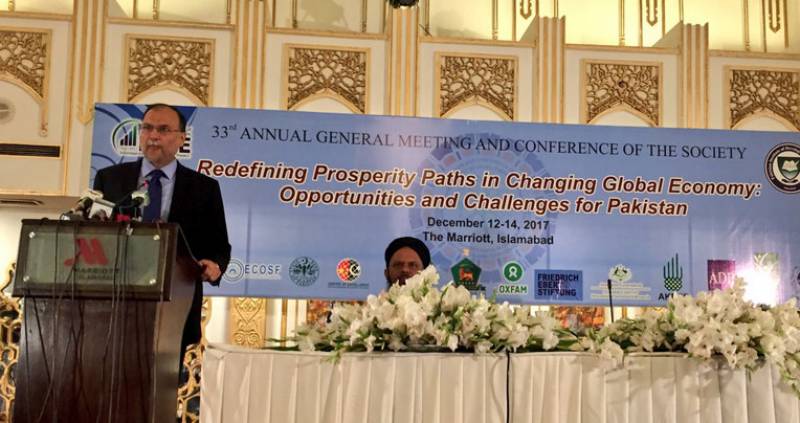 Minister for Planning and Development Ahsan Iqbal says political stability and continuation of policies are prerequisite to accelerated growth and prosperity in the country.

He was addressing the 33rd Annual General Meeting and Conference of Pakistan Society of Development Economics in Islamabad on Wednesday.

Referred to the phenomenal progress achieved by the countries like China, South Korea, Malaysia, Singapore and Thailand he said all of them performed well because of continuity of policies and political stability.

Ahsan Iqbal said sixties is described as golden era of development in Pakistan but the growth was not inclusive and it created regional and social disparities. The country moved on the path of industrialization in sixties but the development process was stopped due to nationalization policy of the then PPP Government.

The Minister for Planning said Pakistan introduced prudent economic policies in the beginning of 90s but successive dismissal of elected governments, the country could not benefit from these policies. Similar policies were introduced by India and Bangladesh and their economies progressed remarkably.

Later talking to newsmen, Ahsan Iqbal said some adjustment in exchange rate would not be injurious to Pakistan's economy.

Responding to a question, he said exports have already started showing positive trend and there would be more improvement in exports with adjustment in exchange rate.

To another question, he said NAB references have impacted upon the image of the country in the comity of nations. He said the global financial circles were appreciative of the services of Ishaq Dar in putting the economy back on its feet.

He regretted that the opposition is resorting to the abusive politics.

He said today's Pakistan is different from what the present government inherited in 2013 and people of Pakistan are firmly behind the developmental initiatives of the Government. He expressed the confidence that this positive sentiment would help PML (N) secure victory in the next general elections.

Responding to a question he said those behind tragedy of Baldia factory Karachi would be taken to task.