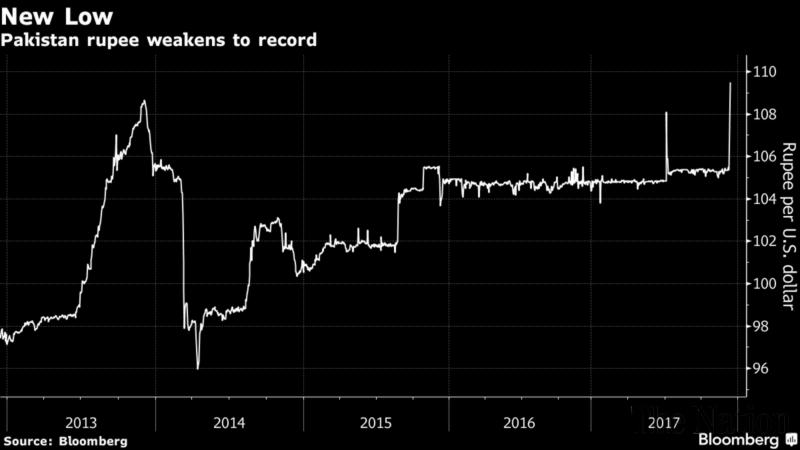 ISLAMABAD - Pakistan’s rupee weakened to a record low after the central bank continued to ease its grip on the currency amid mounting economic pressure and speculation that the country may need International Monetary Fund support, reported Bloomberg.

The rupee was unchanged at 109.5 per dollar at 1:27 p.m. in Karachi, after three days of losses, data compiled by Bloomberg show. The currency has been the worst performer globally since Friday, when the State Bank of Pakistan allowed the rupee to decline.

The nation’s economy has been stressed by widening deficits and declining foreign-exchange reserves that have fallen to less than half that of Bangladesh. That’s prompted investors, economists and the IMF to call for the central bank to scrap its managed float. The rupee was Asia’s most-stable currency since 2014 until the recent weakness.

“The decision to allow the rupee to ease is a belated response to the deterioration in current account and pressure on foreign reserves,” said Hasnain Malik, the Dubai-based head of equity research at Exotix Capital. “This move should have come earlier, but now is better than delaying it further with more trade and capital restrictions.”

The IMF has long indicated it believed the currency was overvalued and the Washington-based lender’s country mission chief, Harald Finger, is due to brief reporters Thursday afternoon in Islamabad after talks with Pakistani government officials last week.

With elections due in August, Pakistan’s Prime Minister Shahid Khaqan Abbasi has denied the nation will need an IMF bailout so soon after completing a $6.6 billion loan program last year that averted a 2013 balance-of-payments crisis. Still, some analysts are speculating that the nation will need financial support as its external position continues to worsen and exports -- such as textiles -- continue to trail regional peers.

The World Bank estimated in October that $17 billion of external financing -- or 5 percent to 6 percent of gross domestic product -- is needed in the year through June for Pakistan to bridge its debt payments and current account deficit. Rising imports on the back of China’s $55 billion “Belt and Road” infrastructure push in the South Asian nation have helped fuel the imbalance as the current-account deficit more than doubled to $14.4 billion in the year through September.

Foreign-currency reserves slumped 29 percent to $12.9 billion in the year through October and in an effort to shore up its finances, Pakistan raised$2.5 billion in a dollar-denominated debt sale last month.