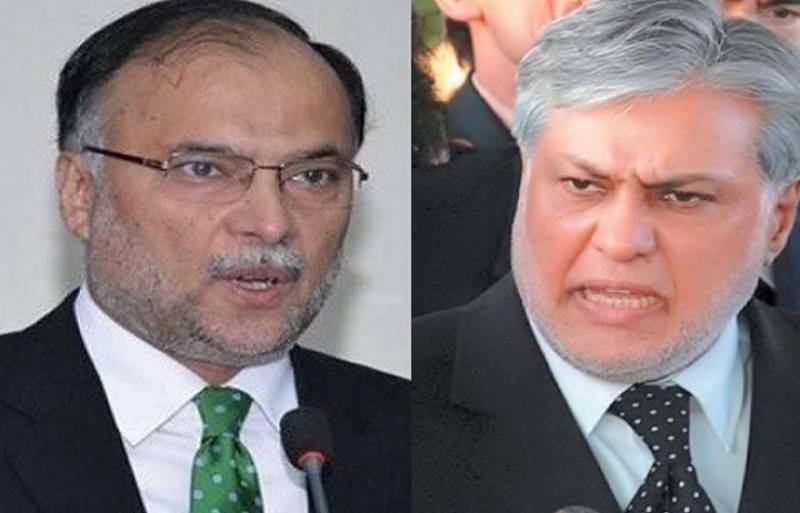 ISLAMABAD - Interior Minister Ahsan Iqbal has said, the “law is above everyone, and no one can escape its shackles”, and so placement of former Finance Minister Ishaq Dar’s on Exit Control List (ECL) is being legally reviewed by the government.

Addressing the media in Islamabad, Iqbal said that the opposition has been constantly abusing the government, and that multiple entities are being formed against the current government as well. “There is Pakistan Muslim League–Nawaz (PML-N) on one side, and the opposition on the other,” he said.

“There are only five months left for this government to complete its term, whoever is busy forming opposition alliances can wait until it’s over,” he added jibing at opposition parties.

“Placing Ishaq Dar’s name on the ECL is under legal review currently, but instead of humiliating him, we should be giving him a medal. The whole world appreciates his work and contribution,” Iqbal added.

The minister also added that since the 1990s, the government has been collapsing after every two years. “India adopted our policies and embarked on a journey to success and progress,” Iqbal said. “It has been said that by 2030, Pakistan will return to the stone ages, instead by 2030, we should be a strong democracy,” he added.

“Pakistan is not drowning, it is heading towards stability and progress,” he added.

He also stated that those who ruined peace in Karachi will be punished. “We will not let anyone destroy Karachi’s peace now,” he said. Hammad Siddiqui, who is responsible for the Baldiya Town incident will be bought to Pakistan after legal requirements have been fulfilled for exchange of offender.