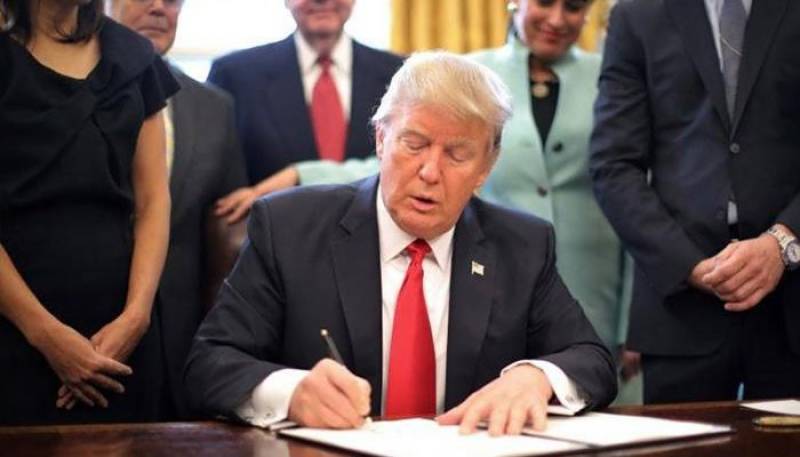 WASHINGTON: President Donald on Tuesday signed a massive defence policy bill that he said would help America bolster its military might and modernise the services.

The National Defense Authorisation Act (NDAA) calls for nearly $700 billion of military spending for the coming fiscal year, but Congress has yet to fully fund it.

"With the signing of this defence bill, we accelerate the process of fully restoring America’s military might," Trump said at a White House signing ceremony, where he was flanked by Pentagon top brass including Defense Secretary Jim Mattis.

"This legislation will enhance our readiness ... and modernise our forces, and help provide our service members with the tools that they need to fight and to win."

While the NDAA passed Congress with bipartisan support, lawmakers have not agreed on how to fund the mammoth spending package, which amounts to more than that of the world’s next seven militaries combined.

Trump called on Democrats in Congress to get in line with Republicans and back a "clean funding bill."

"We must work across party lines to give our heroic troops the equipment, resources, and support that they have earned a thousand times over," Trump said.

The president also took aim at Obama-era budget caps known as sequestration, which Republicans in Congress love to hate.

"Congress must finish the job by eliminating the defense sequester and passing a clean appropriations bill," Trump said. "I think it’s going to happen. We need our military. It’s got to be perfecto."

Trump campaigned on the pledge of increasing military spending and has said America needs more ships, submarines, troops and missiles.

He said the NDAA would give troops their biggest pay increase in eight years.

US allocates $700m for Pakistan under Coalition Support Fund

The United States has allocated $700 million for Pakistan, according to the bill, which would be paid under the Coalition Support Fund.

However, half of the allocated amount, i.e. $350 million, requires certification by the US secretary of defence that "Pakistan continues to conduct military operations that are contributing to significantly disrupting the safe havens, fundraising and recruiting efforts, and freedom of movement of the Haqqani Network in Pakistan."

It also requires the validation that "Pakistan has taken steps to demonstrate its commitment to prevent the Haqqani Network from using any Pakistan territory as a safe haven and for fundraising and recruiting efforts."

The amount shall not be "eligible for the waiver" unless the secretary of defense certifies to the congressional defense committees that "the Government of Pakistan is making an attempt to actively coordinate with the Government of Afghanistan to restrict the movement of militants, such as the Haqqani Network, along the Afghanistan-Pakistan border," it says.

Furthermore, Pakistan requires certification that "it has shown progress in arresting and prosecuting senior leaders and mid-level operatives of the Haqqani Network."