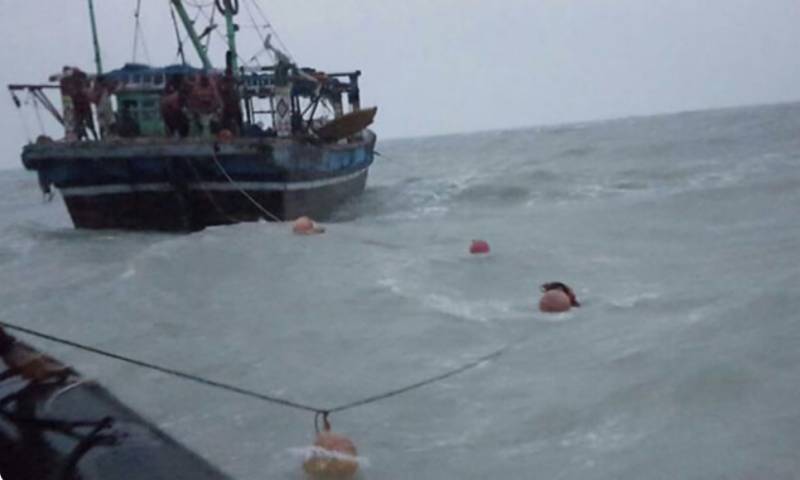 *KARACHI: The Depression over North Arabian Sea, at a distance of about 450km southwest of Karachi has moved in west-southwest direction during last 12 hours, the Pakistan Meteorological Department has stated in its alert.*

The Depression (Intense Low-Pressure Area) now located near Latitude 22.0N and Longitude 64.0 E, at a distance of 500km from Thatta and 350km South of Ormara, according to the weather alert.

Maximum sustained surface winds are 45km per hr gusting to 55km/hr around the system centre. The system is likely to move further westwards till the evening today and then recurve northeastwards and weaken gradually, the PMD said.

Currently none of Pakistan coastal area is under any threat from this weather system, PMD Tropical Cyclone Warning Centre, Karachi is closely monitoring the system and updates will be issued accordingly, weather office said.

The well-marked low-pressure area after intensifying into a Depression on Friday is likely to move further westward till Saturday evening.

Sea conditions would remain very rough during next 2 days, the PMD said and advised the fishermen of Sindh and Balochistan not to venture into open sea till tomorrow night.

The weather office has also advised all concerned authorities to remain vigilant.

Rainfall intensity also to increase in northeastern and southern districts of Balochistan which may trigger flash flooding in Dadu, Jamshoro, Kambar Shahdadkot districts and downstream.