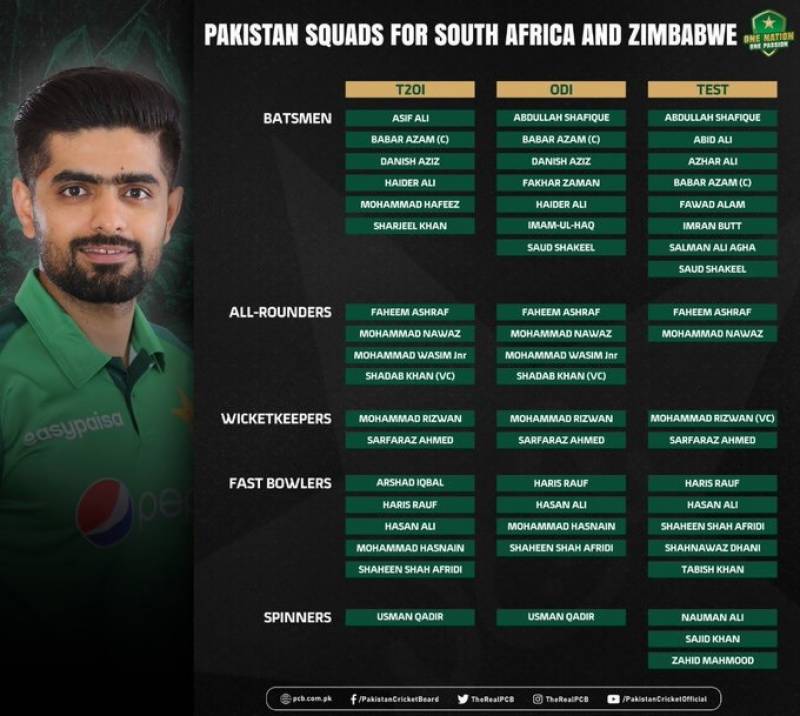 LAHORE – Pakistan cricket selectors have continued to reward domestic performers and show faith in emerging cricketers as they named formidable sides for the upcoming challenges in South Africa and Zimbabwe where the national men’s side will play seven T20Is, three ODIs and two Tests.

The 35-member Pakistan squad will depart for Johannesburg on 26 March for the three ODIs and four T20Is against South Africa. They will then fly to Bulawayo on 17 April for three T20Is and two Tests against Zimbabwe. The side is scheduled to return on 12 May.

Prior to their departure for Johannesburg, a training camp for the white-ball players will be held at the Gaddafi Stadium from 19 March. The players will arrive in Lahore on 18 March following 16 March PCR tests in their respective cities and will undergo further PCR tests on 18, 21 and 24 March. During the Lahore camp, the players will remain in a bio-secure environment.

The T20I and ODI sides include 18 players each with 14 players featuring in both the formats, while the Test squad comprises 20 players with eight players figuring across all three formats. These eight players are Babar Azam (captain), Faheem Ashraf, Haris Rauf, Hasan Ali, Mohammad Nawaz, Mohammad Rizwan, Sarfaraz Ahmed and Shaheen Shah Afridi.

Pakistan white-ball vice-captain Shadab Khan and T20I specialist Mohammad Hafeez have returned to the side after missing the South Africa series.