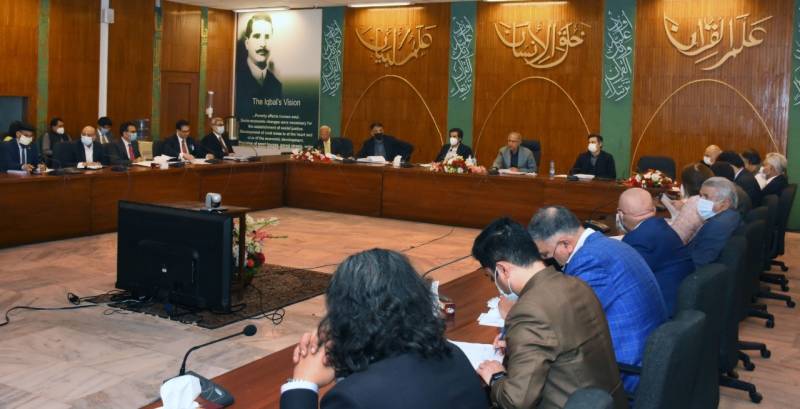 According to the details, a summary was presented before ECNEC regarding Khyber Pakhtunkhwa Human Capital Investment Project (Health Component) to be sponsored and executed by the Department of Health, Government of Khyber Pakhtunkhwa and funded by the World Bank – IDA amounting to Rs. 13,260 million.

The project envisages improving the availability, utilization, and quality of primary healthcare facilities in four districts of KPK and would cover a local population of about 8.4 million and 500,000 refugee population. After due deliberation, the Committee approved the project with the direction that the Government of Khyber Pakhtunkhwa would be responsible for the smooth implementation and working of the project after its completion. The KP Government would ensure the viability and sustainability of the proposed project in the long-run. ------------------------------

The ECNEC considered and approved a summary regarding the construction of additional 02-lanes and widening/rehabilitation of the existing 02-lane carriageway of Shikarpur-Rajanpur section of Indus Highway N-55 to be executed by the National Highway Authority (NHA).

Similarly, another summary was placed before the ECNEC regarding the construction of a 69 km long (04-lane) Sambrial-Kharian Motorway. It will be a high-speed toll road facility, which will start from Sambrial city, and the endpoint would be Lahore- Sialkot Motorway. The motorway would be constructed on a BOT basis at the total cost of Rs.43,382.552 million. The project shall be sponsored by the Ministry of Communications and executed by the National Highways Authority (NHA).

A summary was presented before ECNEC regarding 10,000 Kanal land acquisition for Swat Motorway phase-II to be sponsored by the Government of Khyber Pakhtunkhwa and executed by Pakhtunkhwa Highway Authority (PKHA) (through Federal PSDP) equal to Rs. 20,000 million for construction of about 80 km 04-lane motorway from Chakdara to Fatehpur. The Committee approved the said project and strongly recommended completing such projects on Public-Private Partnership (PPP) basis. The Committee commended such projects for promoting efficient and safe transportation facilities across the country.

ECNEC considered and approved the Sindh Resilience Project (Irrigation Component) for construction of small dams to address drought-prone areas of Sindh, including a system for improving resilience phase-II in districts of Malir (Karachi), Jamshoro, Thatta, Shaheed Benazirabad, Sukkar, Khairpur, Qambar-Shahdad Kot and Tharparkar in the province of Sindh.

Likewise, ECNEC also approved a Balochistan Integrated Water Resources Management and Development Project (BIWRMDP), sponsored and executed by the Irrigation Department, Government of Balochistan. The project will increase agricultural production, generate employment opportunities and develop the agro-based industry through Integrated Water Resource Management across 11 districts in the Balochistan province. The proposed project is funded by the World Bank – IDA (up to 96 percent), and the Government of Balochistan and Farmer’s share (up to 4 percent) amounting to Rs. 14,747.74 million in total. The project is expected to be completed in 06 years.

ECNEC considered and approved another project in the water sector in Balochistan province, titled “Basol Dam Project” on the Basol River. The project would be sponsored by the Ministry of Water Resources, Government of Pakistan, and executed by the Irrigation Department, Government of Balochistan with a total cost equal to Rs. 18,679.89 million. ECNEC considered and approved the Nai Gaj Dam Project (2nd revised PC-I) for District Dadu, Sindh Province at the cost of Rs. 46,980.35 million rupees. WAPDA and Irrigation Department, Sindh will be the executing agencies for the proposed project. The main objective of the project is the conservation of the available flood flows up to a gross storage capacity of 0.30 MAF and power generation of 4.2 MW. It will also help in the irrigation of 56,739 acres, along with controlling the soil erosion on the downstream side of the dam.

The establishment of a 48 MW Jagran Hydropower Station (Phase-II) at District Neelum, AJK, was also approved by ECNEC at (a 2nd revised cost) of Rs. 11,372.135 million. The project will be sponsored by the Ministry of Kashmir Affairs and Gilgit- Baltistan and executed by Power Development Organization, AJK. The project is being constructed on the intermediate stretch of Jagran River and will generate annual energy of 212.43 GWh.

The “Sindh Resilience Project (PDMA Component)” was approved at the total revised cost of Rs. 15,309.14 million. Provincial Disaster Management Authority – Sindh will be the executing agency for the project. The proposed project will contribute to the overall need for enhancing resilience to natural disasters, including public health emergencies in the Sindh province as the COVID-19 pandemic has demonstrated the requirement for integrating health services with disaster management. The project is designed to cover 29 districts of Sindh Province and is expected to be completed by 2024-25.

The Locust Emergency and Food security Project (LEAFS) to respond to food security threats caused by locust in different districts across four provinces was approved by ECNEC at the total cost of approx. Rs. 31,630.60 million (equivalent to USD 200 million) provided by the World Bank. The project will strengthen the Department of Plant Protection (DPP) and also enhance the capacity of Provincial Plant Protection Departments. The project is expected to complete in 03 years.

The Greater Karachi Water Supply Scheme (K-IV) 260 MGD (Phase-I) was also approved by ECNEC to provide additional 650 MGD water to meet the demand of Karachi City. Karachi Water and Sewerage Board and WAPDA shall be the executing agencies for the project. The total cost of the project will be Rs. 25,551.77 million, which will be shared on a 50:50 percent basis by the Federal Government and the Government of Sindh, respectively.