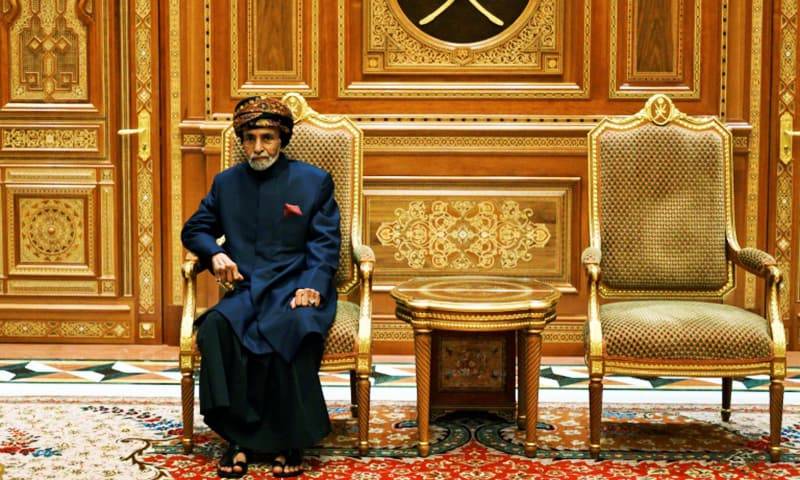 ISLAMABAD - Oman's Sultan Qaboos, who died link on Friday aged 79, transformed the former Arabian Peninsula backwater into a modern state and sought-after mediator while shielding the sultanate from a region in turmoil.

The intensely private sultan — the longest-reigning ruler in the modern Arab world — left no apparent heir. It is not clear who will succeed Qaboos, whose country has a distinct method of choosing the next ruler.

Qaboos was born on November 18, 1940, into the centuries-old Al-Said dynasty in the southern provincial capital of Salalah, in an isolated country on the margins of the modern world.

Older Omanis recall the capital Muscat had no electricity or running water and the gates of the medieval city were locked at dusk.

The young Qaboos was sent abroad for his education to Britain, attending the elite Sandhurst Royal Military Academy from where he graduated in 1962.

He went on to join a British infantry battalion in Germany, returning home to bide his time under the close watch of his father, Sultan Said bin Taymur.

On July 23, 1970, Qaboos deposed his father in a palace coup, pledging "a new era" for the nation. Guardian of the Strait

Oman is strategically located on the Strait of Hormuz — the narrow seaway through which much of the world's oil supply passes — and between regional rivals Iran and Saudi Arabia.

Qaboos maintained good ties with both Tehran and Riyadh, a balancing act that made his capital a must-stop for Western and Arab diplomats as well as military chiefs alike.

The sultan's first foreign trip was to Iran, whose shah — along with the British — helped him quell a Marxist insurgency he inherited from his father in the restive Dhofar region.

Those ties endured through Iran's 1979 Islamic revolution that ushered in a Shia theocracy.

Muscat would serve as the back channel for talks between the United States and Iran in the lead-up to a landmark 2015 nuclear deal.

Qaboos also worked to preserve ties with Saudi Arabia and the rest of the wealthy six-nation Gulf Cooperation Council to which Oman belongs, but stuck to his principle of non-interference.

In March 2015, Oman was the only GCC country not to join a Saudi-led military coalition against Iran-backed Shiite Huthi rebels in Yemen.

It leveraged this neutrality to mediate the release of multiple foreign hostages captured by Yemen's warring factions.

Muscat also maintained close military and economic ties with Britain and the US.

Unlike other Arab states, Qaboos did not contest Egypt's 1979 peace treaty with Israel, opening a trade office in Tel Aviv in the mid-1990s -— shuttered in 2000 during a Palestinian uprising.

In October 2018, Israeli Prime Minister Benjamin Netanyahu held surprise talks with Qaboos in Muscat — a move that raised Palestinian fears of a normalisation of ties.

Qaboos faced rare protests at the height of the Arab Spring in 2011 and responded by sacking ministers accused of corruption.

But his government left no space for opposition, shuttering the independent Azzaman newspaper and jailing its editor as well as the writer of a critical article. All the top posts

Qaboos assumed power as an unknown and spent his first years cultivating the respect of his countrymen, from the mountainous interior to the coast.

"In the early years, he went village to village and he had a weekly radio address — that was the only way to reach the entire population at the time," said Muscat-based public policy analyst Ahmed al-Mukhaini.

Qaboos channelled revenues from fledgling oil exports into infrastructure, taking the country from having just a handful of primary schools and some eight kilometres (six miles) of paved roads to a modern state with well over 1,000 schools and a massive highway network.

The sultan also commissioned an opera house for Muscat, its packed calendar a testament to his support for the arts.

But Qaboos was no ceremonial monarch. He held every top post, from commander of the armed forces to finance minister.

In 1991, he offered a modicum of democracy, creating a Consultative Council — with elected members — to complement the State Council — whose members he appointed.

During nearly five decades in power, Qaboos chose never to remarry after a brief union in 1976.

In his final years, Qaboos was believed to be suffering from colon cancer and rarely appeared in public following medical treatment in Germany in March 2015. When he did, the gaunt, bronzed sultan cut a refined figure in sumptuous robes and colourful turbans. -APP/AFP