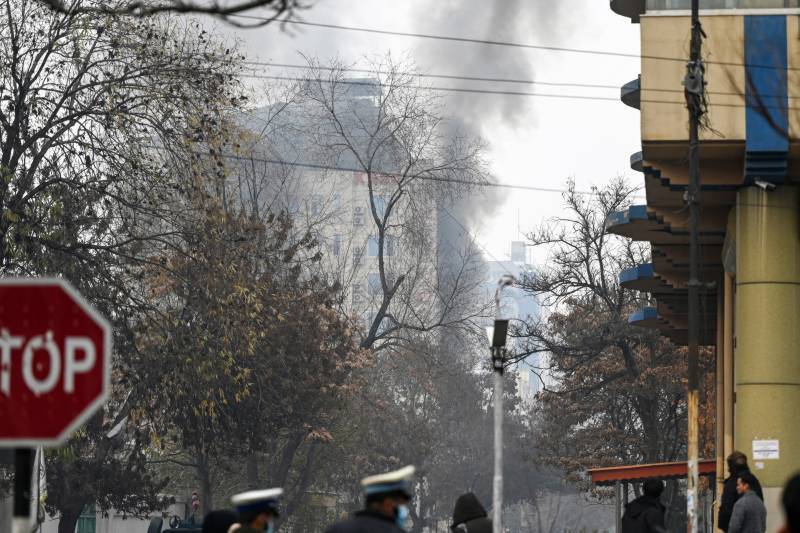 A loud blast and gunfire were heard in the Afghan capital Monday near a hotel popular with Chinese business visitors, a witness said.

The Taliban claim to have improved national security since storming back to power in August last year but there have been scores of bomb blasts and attacks, many claimed by the local chapter of the Islamic State group.

"It was a very loud explosion and then there was a lot of gunfire," the witness told AFP. Afghan media also reported similar details.

Security officials were not immediately available to comment on the blast in Shahr-e-naw, one of Kabul's main commercial areas.

The district is home to the Kabul Longan Hotel, a multi-storey complex popular with Chinese business people who are visiting Afghanistan in increasing numbers since the Taliban's return.

A Taliban source based in Pakistan told AFP that an unknown number of attackers had entered the hotel.

"An operation has been launched against the attackers. Firing continues," he said.

China, which shares a rugged 76-kilometre (47-mile) border with Afghanistan, has not officially recognised the Taliban government but is one of the few countries to maintain a full diplomatic presence there.

Beijing has long feared Afghanistan could become a staging point for minority Uyghur separatists in the sensitive border region of Xinjiang.

The Taliban have promised that Afghanistan would not be used as a base for militants and, in exchange, China has offered economic support and investment for Afghanistan's reconstruction.

Maintaining stability after decades of war in Afghanistan is Beijing's main consideration as it seeks to secure its borders and strategic infrastructure investments in neighbouring Pakistan, home to the China-Pakistan Economic Corridor.

The Taliban are at pains to portray Afghanistan as safe for diplomats and business people but two Russian embassy staff members were killed in a suicide bombing outside the mission in September in an attack claimed by IS.

The group also claimed responsibility for an attack on Pakistan's embassy in Kabul this month that Islamabad decried as an "assassination attempt" against the ambassador.

A security guard was wounded in that attack.

Despite owning the rights to major projects in Afghanistan, notably the Mes Aynak copper mine, China has not pushed any of these projects forward.

The Taliban are reliant on China to turn one of the world's largest copper deposits into a working mine that would help the cash-strapped and sanctions-hit nation recover. Categories : Latest, link Asia link