The China-India standoff in Donglang area has been ongoing for almost two months now, with little sign of an end in sight. As the world pays close attention to the impasse and how it will develop, an expert told CGTN that it is highly unlikely that a war would break out between China and India at this moment.

"Both countries have made no preparations for war and the disagreement on Donglang area is not major enough for both sides to resort to violence as a solution," said a military expert on Sino-Indian relations from a university affiliated with the Chinese People's Liberation Army (PLA) on condition of anonymity.

The expert went on to explain that both sides want a peaceful end to the dispute, but the only solution is for India to withdraw its troops who have trespassed into the Chinese territory. 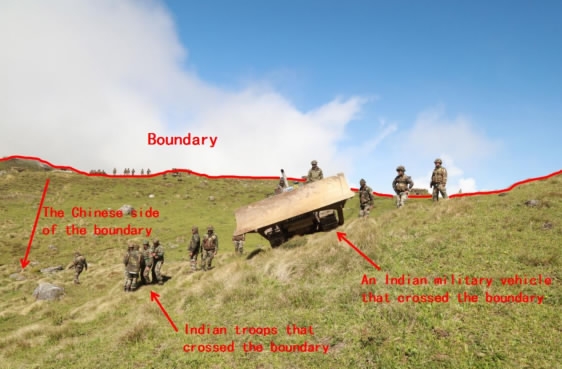 "For India, the problem is how to find an appropriate time and excuse for the pullback. So far New Delhi has not made major changes to its stance, so no progress has been achieved to peacefully resolve the dispute," he said.

The dispute arose in mid-June when Indian border troops illegally crossed the border into territory under Chinese sovereignty and obstructed road construction work in Donglang, which is indisputably Chinese territory according to the Convention Between Great Britain and China Relating to Sikkim and Tibet signed in 1890. 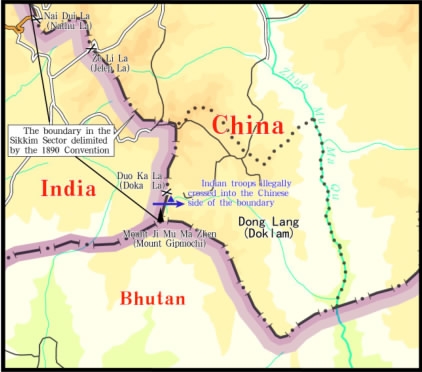 A sketch map of the site of the current standoff between China and India. /MOFA Photo

Why doesn't China want a war?

China pursues a national defense policy that is purely defensive in nature and undertakes a path of peaceful development, said the expert.

"China does not want war and has shown peaceful gestures to India."

Since the incident occurred, China has shown utmost goodwill and great restraint and sought to communicate with India through diplomatic channels to resolve the incident, according to a statement released by the Chinese Ministry of Foreign Affairs on August 2.

The ministry has repeatedly stressed China's stance that the prerequisite and basis for resolving the deadlock is that India immediately and unconditionally withdraws its trespassing border troops back to the Indian side of the boundary. - CGTN