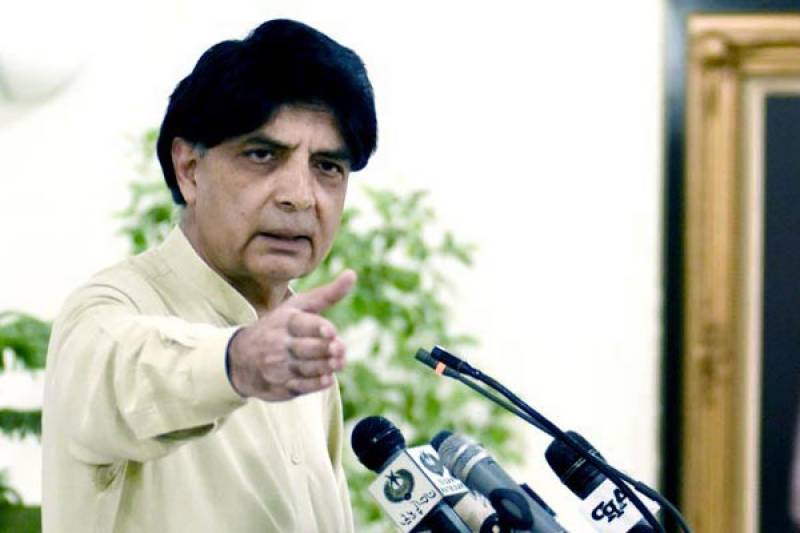 ISLAMABAD: (APP) Minister for Interior and Narcotics Control Chaudhry Nisar Ali Khan on Friday said the story published in Dawn newspaper was not a national security leak rather it was false and fabricated news item.

A special committee has already started its investigation and opposition should avoid politicizing every issue for their own political interests, he said.

Talking to mediapersons after inaugurating an Online Complaint Management and Feedback System here at National Database and Registration Authority (NADRA), he said, well reputed and credible retired judge is heading the committee while record of other members is also above board.

Ch. Nisar said the details mentioned in the story were totally false and added no bitter exchange between the ISI Chief and Chief Minister Punjab, Shahbaz Sharif happened.

With regard to Foreign Secretary's comments, Ch. Nisar said he is a competent person and his words were distorted.

He did say India is trying to isolate Pakistan, but never said Pakistan is isolated.

"When it comes to non-state actors, there has been no contradiction. There has always been consensus," he added.

The Minister said he had talked with Editor Dawn who assured that the reporter who gave the story would come back from abroad to record his comments before the committee.

Answering a question, he said, protest and sit-ins are right of citizens and they will be facilitated, however, lockdown or shutdown of Capital or any other  city will be stopped according to law.

Ch. Nisar said when Chief Minister, Khyber Pakhtunkhwa (KPK), Pervaiz Khattak came to Islamabad for participating in his party's public meeting he was welcomed and facilitated, but in case if he comes for lawlessness, the law of the land will take its course.

To another question, he said there was no gazetted holiday on November 9 (Iqbal Day) and was of the view that there should not be holiday rather special programmes should be arranged in educational institutions to spread Iqbal's message in a befitting way.

With regard to disrespectful comments of Chairman Pakistan Peoples Party (PPP), Bilawal Bhutto Zardari against political leaders, Ch Nisar said this is against the norms of PPP which has a number of respectful leaders.

About change of Governor Sindh, he said decision have been taken by Prime Minister already, adding the former Governor Dr. Ishrat-ul-Ibad had played a long innings.

Earlier, addressing the inaugural ceremony, he announced establishment of passport office in all districts of the country by February next year.   He said that 29,000 Passports have been cancelled.

The Minister that after steps taken by the government, no one can now come to Pakistan without valid documents. Airlines have been heavily fined for violating the new policy. The Minister said he would personally monitor the complaint management system.

As per details, the system will allow any NADRA applicant to register a complaint against a NADRA employee who may have treated the applicant in an unprofessional or discourteous manner.

The complaint will automatically trigger a penalty in the employee's performance-based incentive amount.