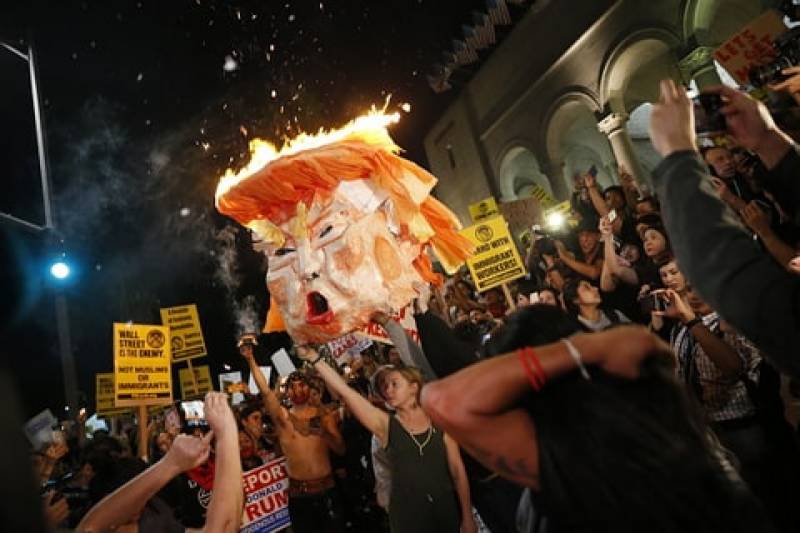 WASHINGTON (APP) - Thousands of protesters angry over Donald Trump's election win took to the streets for a second straight night, with at least one demonstration degenerating into a riot against the tycoon turned president-elect.

Thousands of Americans protest outside Trump Tower in New York

Accusing Trump of racism, sexism and xenophobia, protesters from New York to Los Angeles blocked traffic and chanted slogans like "Not my president" and "We reject the president-elect."

The worst violence was in the northwestern city of Portland, where protesters hurled projectiles at officers, vandalized businesses, smashed car windows and attacked drivers.

Police said they were treating the protests as a "riot" due to what they said was "extensive criminal and dangerous behavior."

In his first comments on the unrest, Trump blamed the media.

The violence stood in contrast to an apparently harmonious meeting between Trump and President Barack Obama designed to heal divisions after the most acrimonious election campaign in recent memory.

Obama and Trump put past animosity aside during the 90-minute White House meeting designed to quell fears about the health of the world's pre-eminent democracy, and vowed to carry out a smooth transfer of power.

After a nasty campaign that culminated in the election of a 70-year-old billionaire and former reality TV star who has never held public office and who gained power on a populist platform, the message was: this is business as usual in a democracy.

The outgoing Democratic president and his successor huddled one-on-one in the Oval Office, for what Obama characterized as an "excellent conversation" and then put on a remarkably civil joint public appearance.

"It is important for all of us, regardless of party and regardless of political preferences, to now come together, work together, to deal with the many challenges that we face," Obama said.

Trump appeared more subdued than usual, and was unusually cautious and deferential in his remarks.

"Mr President, it was a great honor being with you," Trump said, calling Obama a "very good man."