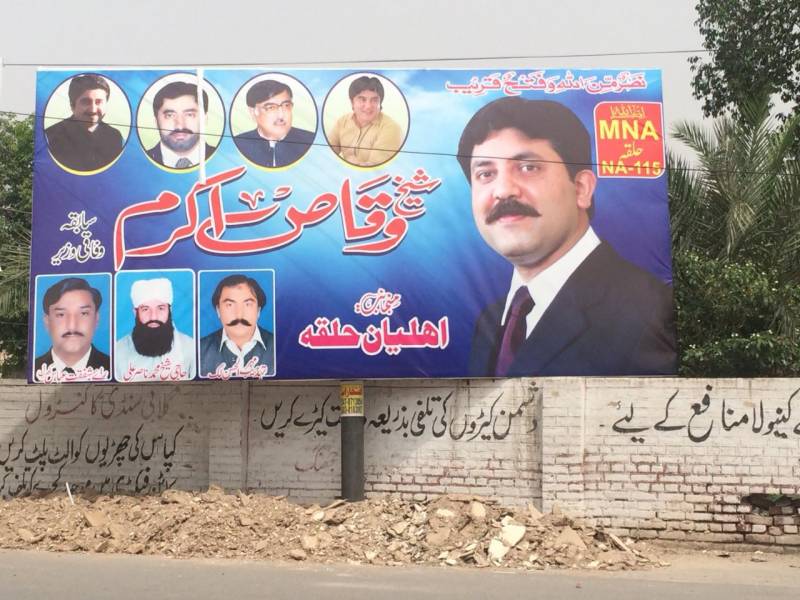 Caption: Erected on a pile of garbage infront of a Govt building on Darul Sakina Road in Jhang, this billboard announces the return of the Sheikh Waqas to electoral politics.
Source: Times of Islamabad

Jhang is one of the most deprived and underdeveloped districts of Punjab, mainly due to its poor and often dishonest political leadership and uninterested administration which always seeks to suppress rather than serve the people of this poor district. The district is dominated by many feudal Syed families and transport tycoons like the CEO of Shalimar Group of Industries, Sheikh Waqas Akram, and his family.

The case of Sheikh Waqas Akram from the Pakistan Muslim League Nawaz (N) is a curious one. Ironically the former MNA and the former 'federal minister for education and training' who also one of the owners of the Muslim Youth University in Islamabad, was disqualified for possessing a fake degree as well a fraudulent migration card, as the News reported in 2013, “All institutions have now verified that Sheikh Waqas’ degrees are fake. Now even his A-level certificate has been declared fake by a prestigious UK institution. This revelation has rebuffed many mouthpieces of the powerful political elite in the media who were repeatedly attacking HEC for demanding intermediate, A-Level or matriculation certificates while the requirement for contesting elections was graduation. How could anyone who did not clear his FA or A-Level get a BA degree without resorting to a fraud?”

"Erected upon a pile of garbage right in front of a Govt owned building located on Darul Sakina Road in Jhang, a giant billboard announces the return of the Sheikh Waqas to electoral politics".

However, as things happen in Pakistan, Waqas Akram’s appeal was abruptly and swiftly accepted by the Election Tribunal back in 2013 without answering any questions regarding his fake and fraudulent documentation upon which he had filed his nomination papers. The former MNA was cleared to contest the 2013 elections, however, chose not to run in favor of his father, who was also disqualified for possessing a fake degree; like father, like son.

A struggling and fractured democracy like Pakistan cannot afford to have low moral and ethical barrier of entry into nation’s top decision and law making bodies. It is the ethical responsibility of nation’s judiciary and the Chief Justice of Pakistan to ensure that we, the people of Jhang district are voting for candidates who fulfill the ethical and moral standards required for lawmakers. Has anyone questioned the election tribunal over its mysterious and abrupt decision to allow the wealthy Sheikh Waqas to run in the elections? – did the sweet money exchange hands to give him a clean chit without asking the very real questions about his fake and fraudulent documentation? – That would be a million dollar question; we’d probably never know the answer to.

The people of Jhang expect their political leaders to exercise the highest possible moral, ethical and legal standard in return for their precious votes, thus it is only fair that the law of the land is properly applied against the fraudulent degree holders like Sheikh Waqas Akram and his father, because that is a basic right of the polity of Jhang; so the people don’t have to vote for such candidates who deliberately lie and mislead the law and their own voters.

With the honorable Judiciary working in high gear to clean the system, it becomes prudent for civil society activists to demand an impartial application of law and ethics, so only the most eligible political leadership gets to make decisions that affect our future and the future of our children. Because of the total lack of conscious and self-accountability in our polity, the Judiciary must remove and dispose of those politicians who use methods of fraud to further their ambitions and power, only then a true democracy will be born in Jhang and other deprived areas of this great country.

Zaira Rasool is an activist from Jhang district and a student of Political Science and Public Administration at Punjab University Lahore. All opinions expressed belong to the writer and do not reflect the policy of the platform.