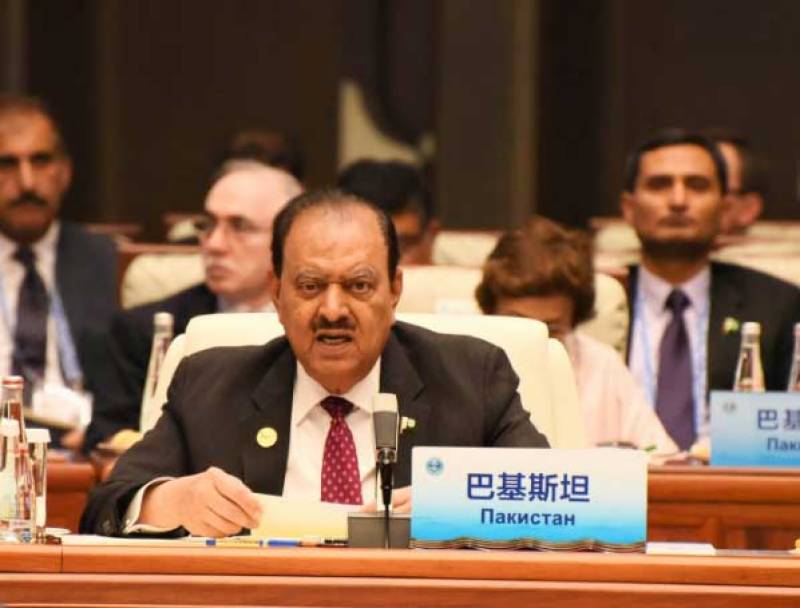 ISLAMABAD: President Mamnoon Hussain says Pakistan has rendered unprecedented sacrifices in war on terror to bring peace in the region.

Addressing the SCO Summit at Qingdao in China today, he said law and order situation has improved in Pakistan due to our effective efforts against terrorism and extremism.

The President said democratic values and democratic institutions have strengthened in Pakistan.

Mamnoon Hussain peace and stability in Afghanistan is our common objective and Pakistan is playing its due role in this regard.

He said that ceasefire in Afghanistan is a positive sign for regional peace.

The President said Islamabad and Kabul are working on a comprehensive strategy on bilateral basis to establish peace in Afghanistan.

Mamnoon Hussain said the CPEC is changing economic outlook of Pakistan which has been dubbed as the best destination for private investment.

He said nine industrial zones are being established in different parts of the country, which will offer special incentives to the investors.

The President suggested five point preferences for development of the region. These include investment, trade, e-commerce, railways and tourism.

Mamnoon Hussain felicitated the Chinese government and the people of China on successful conduct of SCO Summit and said that Pakistan has issued special Postal Stamp on the eve of this event.

The summit was chaired by Chinese President Xi Jinping which was participated by the Heads of State of SCO Member States.

The leaders of four Observer States of SCO; Presidents of Afghanistan, Belarus, Iran, and Mongolia also participated in the meeting.

The Heads of State held a 'restricted format' meeting and exchanged views on contemporary regional and global issues.

They agreed to further enhance cooperation and mutual trust to realize the maximum potential offered by the organization.

They reiterated their commitment to the Charter of SCO and to the "Shanghai Spirit" which includes refence to mutual trust, mutual benefit, equality, consultation, respect for cultural diversity and pursuit of common development.

The Summit witnessed signing of over 20 documents outlining future SCO trajectory in a number of spheres.