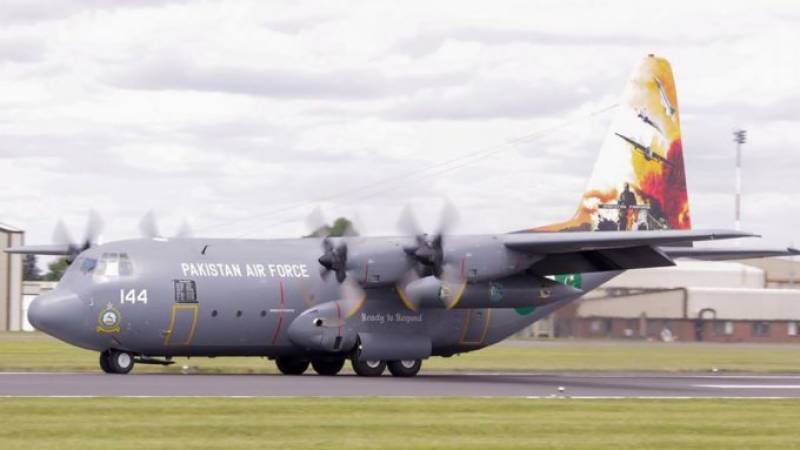 More than 50 nations with 200 aircraft from across the world competed for the coveted trophy; however, the PAF C-130 stole the show with its attractive Zarb-e-Azb theme colors.

On the final day of the Show Air Marshal Asad Lodhi, Vice Chief of the Air Staff also visited the venue and congratulated the PAF air and ground crew for winning the prestigious trophy and bringing laurels to the country.

Talking to PAF contingent, he appreciated their untiring efforts for achieving this honor and said that this great achievement would go a long way in projecting the soft image of the country across the world, said a message received here.

PAF C-130 continued to attract large crowd on the last day of the show as well and people thronged to catch a glimpse of the display aircraft painted in Zarb-e-Azb theme, who were also briefed about the pivotal role of PAF in the success of Operation Zarb-e-Azb against the terrorist elements in Pakistan.

The PAF C-130 aircraft, which was specially painted to highlight the sacrifices of Pakistani people and the Armed Forces in Operation Zarb-e-Azb, had arrived at Royal Air Force Base, Fair Ford (UK) to participate in the Royal International Air Tattoo Show-2016.

The PAF contingent comprising air and ground crew participated in the various competitions and events organized at the Royal International Air Tattoo Show-2016.

This is the second time that PAF has won this prestigious trophy as PAF C-130 had participated in this event in July, 2006 as well and had won three major trophies of the competition.