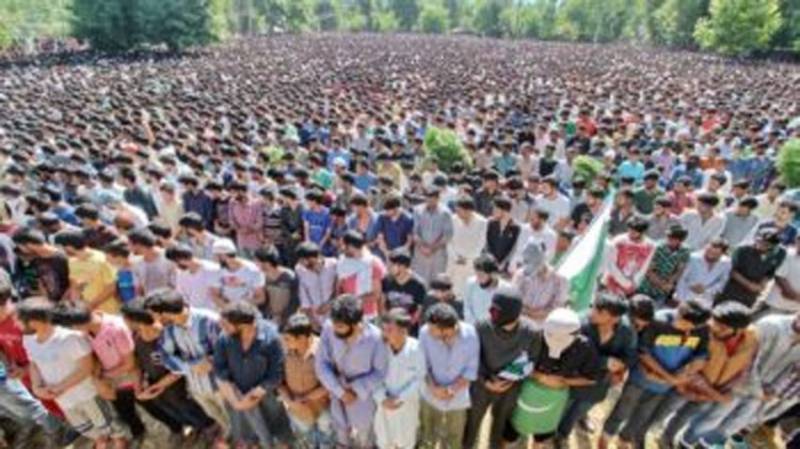 In Occupied Kashmir, thousands of people participated in the funeral prayers of a martyred youth, Farhan Wani, in Kulgam district on Wednesday.

According to Kashmir Media Service, Farhan was martyred by Indian troops during a cordon and search operation in Kokernag area of Islamabad district on Tuesday.

Multiple rounds of the funeral of martyred Farhan Wani were held at his native village in Khudwani area of the district.

The youth was buried amid pro-freedom, pro-Pakistan and anti-India slogans.

Chairman All Parties Hurriyet Conference, Syed Ali Gilani, who continues to remain under house arrest for the past many years, addressed the mourners over phone from his Hyderpora residence in Srinagar.

Complete shutdown was observed in Islamabad and Kulgam districts to mourn the killing of Farhan Wani and another youth, Khalid Ahmed Dar, by the Indian troops.

All shops and business establishments were closed while traffic was off the road in the two districts.

In a statement in Srinagar today, the Joint Resistance Leadership comprising Syed Ali Gilani, Mirwaiz Umar Farooq and Muhammad Yasin Malik called for complete shutdown on Saturday to protest against the killings.

All Parties Hurriyet Conference in a statement in Srinagar said that India is not sincere in finding a peaceful and lasting solution to the Kashmir dispute.