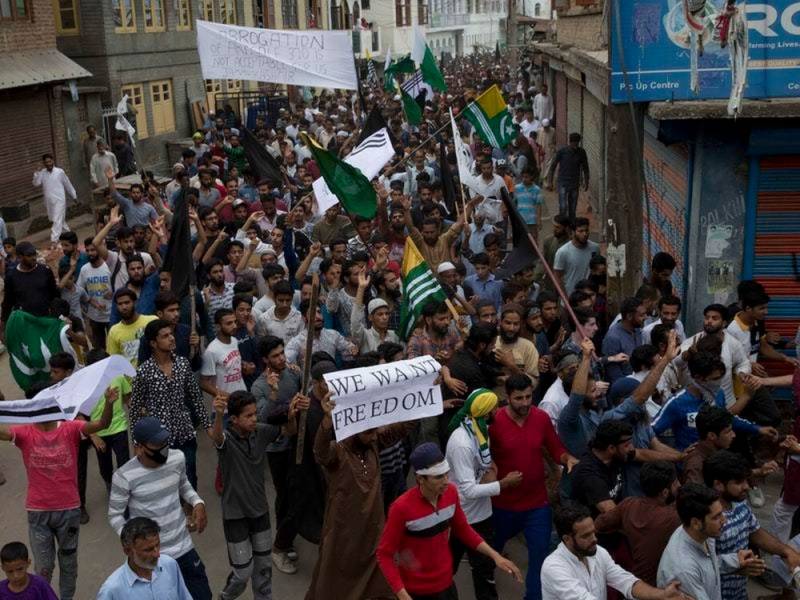 In occupied Kashmir, scores of people were injured some of them critically when Indian troops and police used brute force against thousands of protesters in Srinagar.

Defying stringent curfew, thousands of people including women, children and elderly persons gathered in Soura area of Srinagar soon after Juma congregational prayers, yesterday, and protested against New Delhi’s action of abrogating special status of the occupied territory. A police officer confirmed that there were around 10,000 people at the protest in Soura. The protesters raised high-pitched slogans like “We want freedom”, “Go India go back” and “Indian Constitution unacceptable”. Indian troops and police pushed back the demonstrators at Aiwa Bridge by firing bullets, pellets and teargas shells resulting in the injuring of many people. Some women and children even jumped into the river when the police used teargas and pellets against the protesters at the Aiwa bridge.

BBC Urdu quoting police sources said that during the past few days over 100 incidents of massive protests had occurred during which scores of people had been injured due to the use of brute force by the Indian troops. The BBC correspondent, Geeta Pandey, who travelled for two days around occupied Kashmir, in a report wrote that thousands of gun-wielding troops patrol deserted streets that are barricaded with coils of razor wire, and residents remain locked up inside their homes in the territory.

Meanwhile, the communication blackout continued on the 6th consecutive day, today, as the authorities keep the internet and telephone links snapped and strict restrictions imposed. Almost all Hurriyat leaders, including Syed Ali Gilani and Mirwaiz Umar Farooq, have been put under house arrest or in jails. Over 800 political leaders and workers including even pro-India politicians like Farooq Abdullah, Omar Abdullah, Mehbooba Mufti and Sajjad Lone, have been detained. The severe blockade has aggravated the situation as the people of the valley are facing severe shortage of essential commodities. Hundreds of labourers from Indian states are fleeing occupied Kashmir fearing violent response of people to India’s move of repealing Article 370 and bifurcating Jammu and Kashmir into two Union Territories.

In UK, hundreds of Kashmiris and their sympathizers held a demonstration in Luton against India’s action of placing occupied Kashmir under military siege. Member of British Parliament, Jess Phillips, in a letter to the UK Secretary of State, Dominic Raab, urged his government to mediate between Pakistan, India and Kashmiris to ensure the rights of the Kashmiri people were not infringed upon.