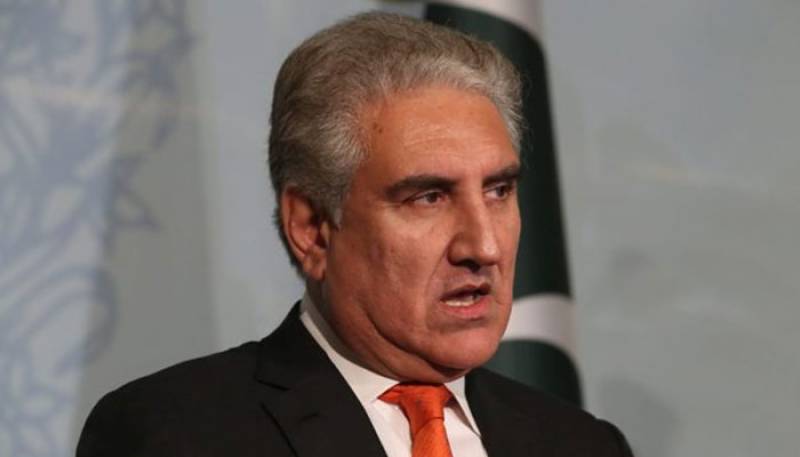 ISLAMABAD: Foreign Minister Shah Mehmood Qureshi Saturday said Pakistan was seriously contemplating taking the issue of revocation of the special status of the Indian Held Kashmir (IHK) by New Delhi to the United Nations and cautioned that it was going to be a long-drawn process.

“We are considering other options as well including the legal ones. This is not an event. This is a process. A process when we also fear more bloodshed in the valley in the coming days. We sincerely hope that there is no bloodshed, but we see things moving towards escalation in tension,” Qureshi told reporters at the Foreign Office on his return from China.

He reiterated that Pakistan would stay clear of any military options.

Earlier, Prime Minister Imran Khan had also ruled out the policy of the past in which armed fighters were sent into the valley.

“This does not mean that Pakistan would lower its guard. However, we reserve the right to defend our motherland in event of any misadventure,” he said.

Qureshi said he would be updating Prime Minister Imran Khan on his Beijing visit and also the way forward. For this, the foreign minister said he would also be holding brainstorming sessions with former officials of the Foreign Office.

Qureshi said China had decided to fully support Pakistan on the Kashmir issue amid New Delhi’s attempts to change the demography of the disputed area and ethnic cleansing of Kashmiris.

“Protests in Srinagar after the Friday prayers where thousands marched only to be met with heavy police firing. Another blatant reminder of India’s continued disregard for sanctity of life. Let the voices of Kashmir be heard loud and clear. Let them have peace,” the minister tweeted.

He recalled that China fully supported Pakistan's decision to go to UN Security Council on Kashmir and assured complete cooperation in this regard.

“The Chinese side agreed that the steps taken by India are unilateral changing the status quo and structure of occupied Jammu and Kashmir,” he added.

Wang Yi also agreed that the Indian steps could jeopardize peace and stability in the region.

Qureshi said his Chinese counterpart was in concurrence that Jammu and Kashmir had been recognized as a disputed region and its resolution should also be in the light of UN resolutions.

He said the Chinese side had been informed that after lifting of curfew in the IHK, a new era of atrocities might start in the territory evoking reactions.

Referring to the past when India indulged in such practices, Qureshi said, “As part of its reckless approach, there could be some false flag operation and Pakistan blamed on the fake pretext of terrorism”.

Through the media the foreign minister said on August 14 the whole nation should also wave the flag of IHK along with Pakistan’s green flag.

“The whole nation should chant slogans of ‘Kashmir Banega Pakistan’,” he added.

The foreign minister said increase in the region’s security measures and heightened human rights violations in the IHK were two negative consequences of India’s decision in its latest policy on Kashmir.

Qureshi said protests had erupted simultaneously throughout the occupied valley as soon as curfew was relaxed for a few hours on Friday, adding that there were also reports of deaths in clashes between the protesters and the Indian troops.

There are also reports of food shortages as the curfew entered its sixth day on Saturday, said the Minister.

“Acute shortage of medicines is an equally important issue. Pakistan has the right to intervene because India has attempted to change demography of a conflict region,” he added.

Turning to the reaction of the UN Secretary General Antonio Guterres after Pakistan wrote to him in detail about the IHK, the minister said, “He accepted Pakistan’s historic stance on the dispute in his statement”.