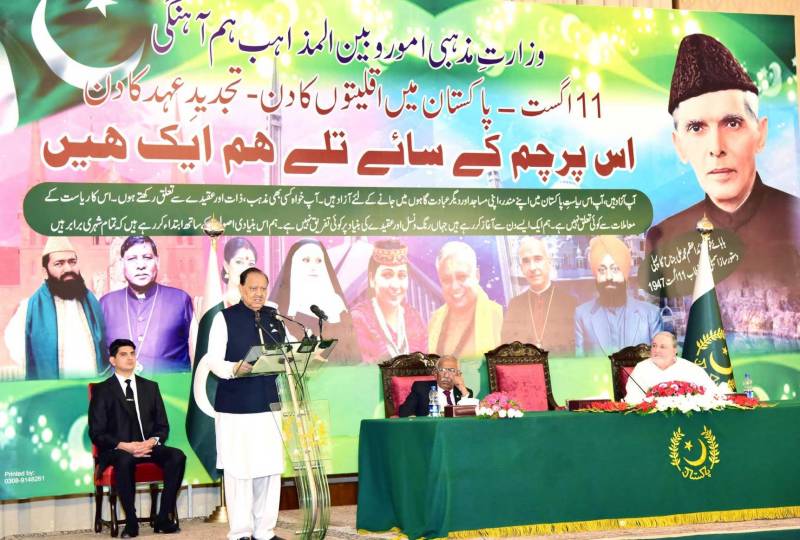 ISLAMABAD: National Minorities Day is being observed across the country today, to highlight the contributions and sacrifices of minority communities in creation of Pakistan and nation-building.

Various events, including seminars and social gatherings, will be organized across the country by different religious communities to celebrate the day in a befitting manner.

The day recalls the vision of Quaid-i-Azam Mohammad Ali Jinnah, who in his speech to Constituent Assembly on August 11, 1947 in which he announced complete freedom for minorities to follow their faith.

On this day, the government reiterates commitment to follow the vision of Quaid-i-Azam Muhammad Ali Jinnah for an enlightened, liberal, progressive and tolerant Pakistan.

Meanwhile addressing a ceremony in connection with National Minorities Day in Islamabad on Friday night, President Mamnoon Hussain said success of representatives of minority communities on general seats in the elections is a positive message to the world.

He said the aim of observing Minorities Day is to reiterate the pledge that Pakistani society will continue its efforts to protect rights of minorities and promote religious harmony in the country.

The President said Pakistani nation always stands by minorities in every hour of difficulty and the negative propaganda about less opportunities for minorities in the country should be stopped.

Mamnoon Hussain said Ulema and religious leaders have always worked for promoting tolerance in the society.

The ceremony was also addressed by caretaker Minister of Religious Affairs Muhammad Yusuf Shaikh, and representatives of various religious minorities.

In his message on Minorities Day, Caretaker Prime Minister Nasir-ul-Mulk, said the government has taken considerable steps to protect rights of minorities and ensure their religious and cultural independence.

He lauded the huge contributions made by minorities for the country’s socio-economic development.