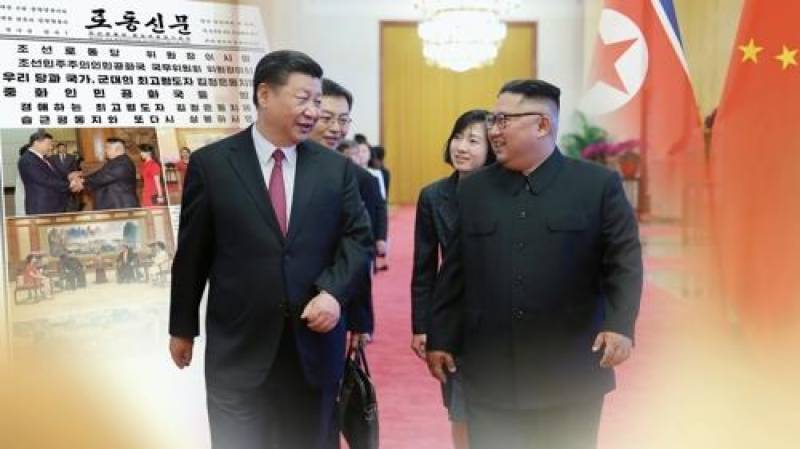 BEIJING: North Korea and China are expected to push for Chinese President Xi Jinping's visit to Pyongyang this year, as the two countries reaffirmed their strong alliance through the North's 70th founding anniversary event over the weekend, sources here said Monday.

According to the sources, the Chinese leadership is considering Xi's travel to North Korea at an appropriate time, separately from the Pyongyang visit of Li Zhanshu, a member of the Standing Committee of the Political Bureau of the Communist Party of China.

Media speculation about Xi's visit to North Korea around its Sept. 9 founding anniversary didn't come true apparently due to pressure from the United States and other reasons, but his Pyongyang trip still remains a valid possibility, they explained.

"Xi's North Korea visit is still being discussed between the two countries, through its timing is difficult to predict. As Kim has expressed hope for high-level exchanges, Xi's Pyongyang trip can happen at a certain time," a source said.

Indeed, in a meeting with Li in Pyongyang on Sunday, Kim reportedly expressed hope to "further solidify and deepen the special and firm relations between North Korea and China" through stepped-up high-level exchanges and close communication.

In response, Li was quoted as saying that his country's relations with the North are getting stronger based on a "special relationship" between the leaders of the two countries while delivering Xi's personal letter to Kim.

The No. 3-ranked Chinese official also praised the North for shifting its policy focus to economic construction.

In this regard, the sources predicted that China is expected to engage in maximum economic cooperation with the North within the boundary of U.N. economic sanctions to help pave the way for Xi's Pyongyang visit in the future.

Ahead of Li's visit to Pyongyang, a Chinese economic and trade delegation arrived in the North to discuss bilateral economic cooperation. In June, about 200 Chinese companies participated in an international trade fair in Pyongyang.

"At present, U.N. sanctions bar Chinese individuals and enterprises from openly doing business with North Korea. But China appears to be stepping up economic cooperation, increasing North Korea-bound tourism and widening agricultural cooperation, mainly in the border areas where sanctions can be avoided," another source in Beijing said.