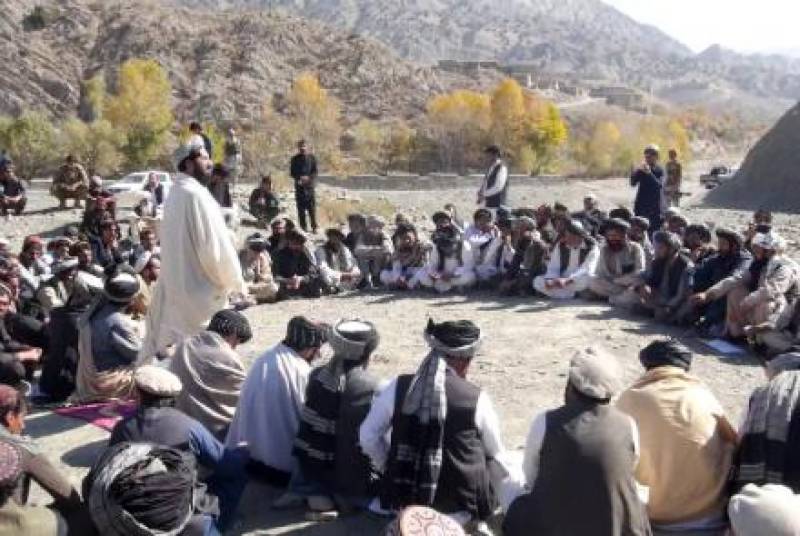 KABUL - A group of tribal elders from Paktia province, in the southeast of Afghanistan, said they are ready to mediate between the Kabul government and Haqqani network – which is fighting against local and foreign forces in the country and, according to state officials, the group is involved in many deadly attacks against the Afghan civilians.

The tribal elders said to shoulder the responsibility, they want the authority from government to bring members of the insurgent group to the peace table.

According to the elders, Sirajuddin Haqqani, leader of the Haqqani network, is an elder from the Zadran tribe and that this will help them to bring the group to the peace table – if government gives them the authority.

“He (Sirajuddin Haqqani) is our elder. We will go and talk to him and will tell him that Mr. Haqqani, we will ensure your rights, we will stand with you shoulder-to-shoulder and I am sure that he (Haqqani leader) will stand with us,” said Haji Zmrak, an elder from Zadran tribe.

“Government does not have the will for peace… If the Zadran tribe and Paktia people are given the authority to mediate and carry out peace talks, I am sure that they can talk with anti-government armed oppositions and will take positive steps in this respect,” said Mawlawi Sardar Zadran, a tribal elder.

The elders and youth who gathered at a jirga, assembly, in Gerda Serai district in Paktia said some countries in the region are not in favor of peace and stability in Afghanistan.

“(Some) people are unhappy with government but they will be satisfied if their legal demands are addressed,” said Sangin, a tribal elder.

Another tribal elder, Rasul Jan, said: “(If the authority is given to us), we will sit with anti-government armed groups and will ask them to end the war in Afghanistan. Others are not blamed, there are a number of countries in the region which are not interested to see a peaceful Afghanistan.”

Sirajuddin Haqqani is a native resident of Gerda Serai district in Paktia.