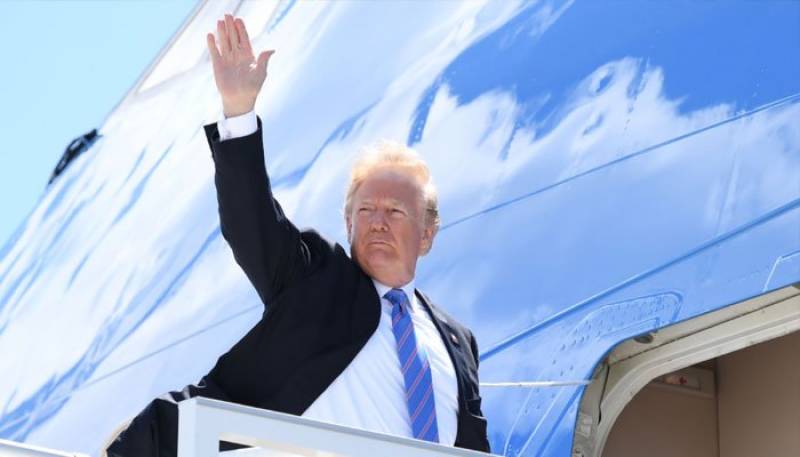 Canada: US President Donald Trump predicted Saturday that he would know within a minute of meeting Kim Jong Un whether his "one-time shot" at peace with the North Korean leader had a chance of succeeding.

Speaking just before embarking on his marathon journey to Singapore for the pair's historic summit, Trump bristled with confidence as he boasted that contacts between their respective negotiating teams had been positive.

"It's unknown territory in the truest sense but I really feel confident," Trump said as he prepared to leave the ongoing G7 summit in Canada early and head to Asia.

"I feel that Kim Jong Un wants to do something great for his people and he has that opportunity... It's a one-time shot," he said at a press conference, adding that the North Koreans had been working "very well with us."

After his remarks, Trump headed to the Canadian air base at Bagotville by helicopter before boarding Air Force One and setting off for Singapore, where he was scheduled to arrive late on Sunday.

Trump and Kim are due to have the first ever US-North Korea summit in Singapore on Tuesday, with the American leader hoping his counterpart will scrap his nuclear weapons programme in return for security guarantees.

The US president is the first of the G7 leaders to leave the summit in Canada where he has briefed his peers on the meeting.

"I am on a mission of peace and we're going to be carrying the hearts of millions of people from all," he said. "We have to get denuclearisation, we have to get something going."

Asked how long it would take for him to work out if Kim was serious about striking some kind of peace deal, Trump replied: "I think within the first minute I'll know.

"I think I'll know pretty quickly whether or not, in my opinion, something positive will happen. And if I think it won't happen, I'm not going to waste my time. I don't want to waste his time."

The summit between Kim and Trump will cap a remarkable turnaround in relations between two men who were trading furious insults less than six months ago.

After North Korea carried out a series of long-range missile tests that potentially put the US mainland in range of a nuclear strike, Trump promised to respond with "fire and fury."

He also ridiculed Kim in a speech at the UN General Assembly as "Little Rocket Man" who in turn called Trump a "dotard."

But after a cooling of the rhetoric, both sides began forging tentative contacts that eventually saw Mike Pompeo — the former head of the CIA who is now secretary of state — meet Kim in Pyongyang.

Speaking on Thursday, Pompeo said that Kim had personally assured him that North Korea was ready to give up its nuclear arsenal.

Some critics have said that the summit is being rushed through, with Trump keen to chalk up his first major foreign policy achievement.

But the president insisted that the US team was leaving no stone unturned in its preparations, while warning that patience was needed.

"We're going in with a very positive spirit, I think very well prepared. And, by the way, we have worked very well with their people," he said.

"Our people have been working very, very well with the representatives of North Korea. We're going in with a very positive attitude and I think we're going to come out fine," he added.