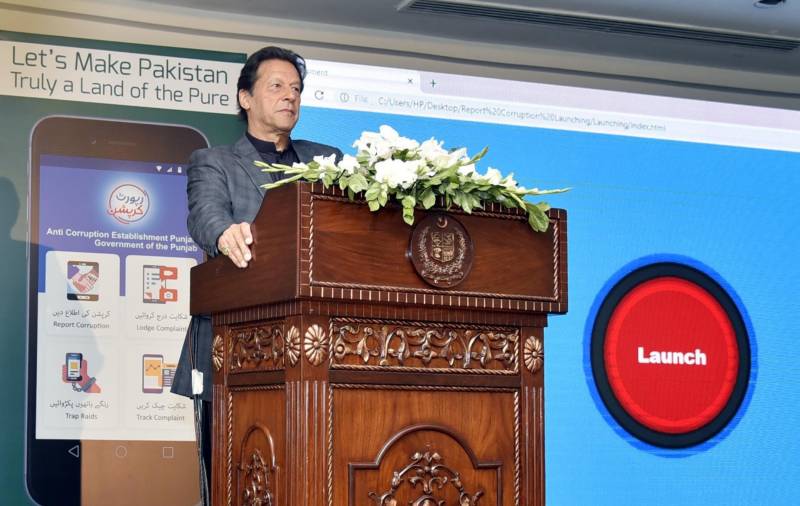 Addressing the ceremony, he termed it as a major step in making the country corruption free. He expressed hope that this app will help transforming Pakistan into a modern and transparent nation.

The Prime Minister said the Anti-Corruption Punjab has been successful in recovering billions of rupees from corrupt elements which need to be widely publicized.

He said the recovered money will be spent on the uplift and betterment of people.

Imran Khan urged the Punjab government to widely disseminate information about the money recovered from corruption to people.

He regretted that people are unaware about the vital link between corruption and their miseries.

Referring to the example of China, the Prime Minister said hundreds of people have been put in jails on graft charges including ministers in order to eradicate corruption from their country.

He said in Lebanon, Chile, Iraq and other countries people are protesting on roads against the corruption of their rulers.

Imran Khan said today corrupt countries are poor and transparent nations are rich. He referred to the example of Congo, Nigeria and other African countries which are rich in natural resources, but their people are facing extreme level of poverty due to rampant corruption in their societies.

The Prime Minister said Switzerland, on the other hand, lacks natural resources, but is very prosperous and rich.

He said a modern and prosperous society gives great emphasis on anti-corruption.

He said when corruption in any society increases, the money that was to be spent on health, education and other necessities of people transfers to the pockets of corrupt people.

He said as those corrupt people are afraid of discovery of their ill-gotten wealth, they transfer it abroad.

Terming overseas Pakistanis as precious asset of Pakistan, Imran Khan said they can invest heavily in the country if they are sure of no corruption. He called corrupt person as enemy of the people.

Speaking on the occasion, Chief Minister Punjab Sardar Usman Buzdar said the government is committed to eradicate the menace of corruption from the province.

He said launch of this new "App" is beginning of a new era. He said this App will enable the complainant to view the progress on his complain.

The Chief Minister said the government of Pakistan Tehrik-e-Insaf will fulfill its agenda of justice and accountability.

He said Anti-Corruption Department of Punjab has recovered land worth 132 billion rupees and about 4.75 billion rupees were deposited in the national exchequer.

Usman Buzdar also urged the people to play their due role to eradicate corruption.

Special Assistant to Prime Minister on Accountability, Shehzad Akbar in his speech on the occasion, said we will digitalize Punjab Anti-Corruption Department.

He said launching of the App is a step forward to automate the system. He said this App will be practical demonstration of Whistle Blowing concept.

The Special Assistant expressed hope that Anti-Corruption Department will double its recovery after the launch of this App.