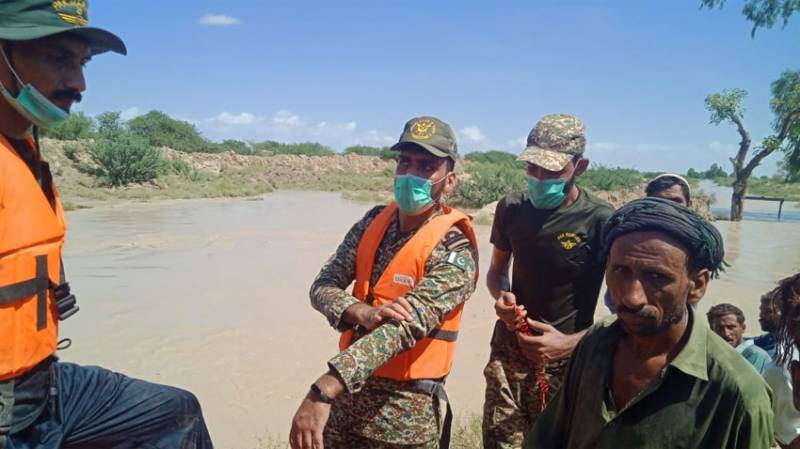 According to ISPR, Pakistan Army and Navy rescue teams, including medical and engineering teams, are assisting civil administration to rescue stranded people to safer places.

Hot meal has been served to 1000 stranded people. Jhal Magsi-Gandawah main colonies have been connected. Pasi Bridge has been opened for all kinds of traffic and Coastal Highway has been connected.

In Jhal Magsi, all Hindu families stuck in Wangu hills have been rescued to safer places after eight hours long rescue operation.

N-65 National Highway is blocked near Bibi Nani Bridge and Pinjra Bridge due to high level of water.

Due to rains and hill torrents, Quetta-Jacobabad, Gawadar-Karachi and Sibbi- Kohlu roads have been blocked at various places.

A shuttle train service has been launched between Quetta and Sibi to take stranded passengers to their destinations due to suspension of road connectivity after heavy rains and flood in Bolan area.

Pakistan Railways’ sources told Radio Pakistan Quetta that a shuttle train carrying about four hundred passengers left Sibi for Quetta on Sunday evening while another train will leave Quetta for Sibi at 10 am on Monday.

The shuttle service will be kept continue till the restoration of the road link between Quetta and Sibi.